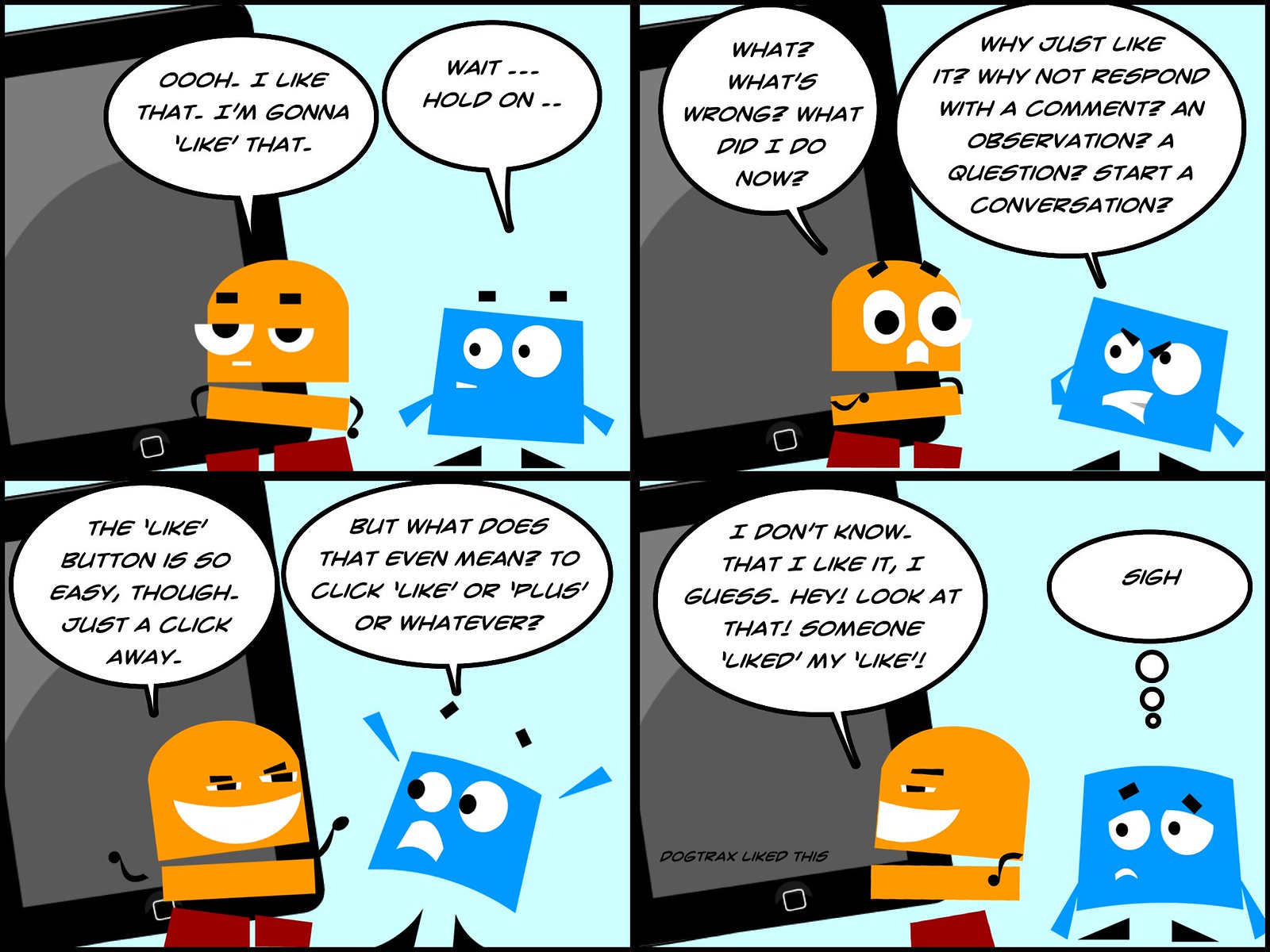 Is there any doubt that the world would be a little better place if we took the time to talk, even in digital spaces, with each other? A “like” or a “plus one” or a “boost” or whatever is something, to be sure, but is it enough? Does it have depth? Nope. I can’t even remember what I liked yesterday and I bet you can’t either.

I was thinking about this topic recently when developing a session on blogging. I created a paper blog and added a space for ‘likes’, ‘read’ and ‘comment’.

My intent was to get people to think about the different points of data and what they might mean.

Personally, I have a long history of sharing quotes from posts that grabbed my attention. My issue was this wealth of knowledge was shared within someone else’s house. I have therefore taken to posting on my own site. This has led me to organise responses into different kinds, including likes, bookmarks, replies, listens, watches and reads.

For me, a ‘like’ often refers to something I thought was interesting, but do not really have anything else to add, either personally or as a comment to the author. In many respects these ‘Likes’ are for me firstly. I think that they are similar to Chris Aldrich’s read posts. (I use ‘reads’ for books.) I often link to articles I like in my own writing, rather than hit originals with endless pingbacks. See for example this post by Richard Olsen:

In addition to sharing in someone else’s house, I felt I had lost my purpose in plastering Twitter with endless quotes that were simply feeding the stream. I have subsequently tried to be more mindful, fearful of becoming a ‘statistical zombie’ as danah boyd puts it:

Stats have this terrible way of turning you — or, at least, me — into a zombie. I know that they don’t say anything. I know that huge chunks of my Twitter followers are bots, that I could’ve bought my way to a higher Amazon ranking, that my Medium stats say nothing about the quality of my work, and that I should not treat any number out there as a mechanism for self-evaluation of my worth as a human being. And yet, when there are numbers beckoning, I am no better than a moth who sees a fire.

Compared to the simplicity of just liking, favouriting or clapping, using my own site to ‘like’ involves more effort than a quick click. Although micropub clients provide an easier workflow, I find the effort put into crafting a like makes it something more than just clicking a button. I really like what Clay Shirky says:

The thing I can least afford is to get things working so perfectly that I don’t notice what’s changing in the environment anymore.

Maybe then rather than beyond like we need to reimagine what the like is all about and start from there?