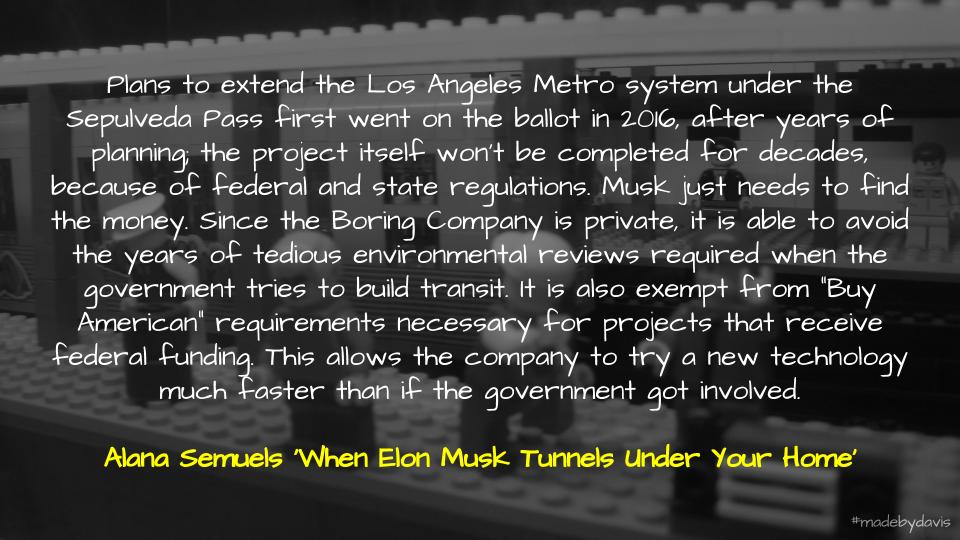 The billionaire is drilling for futuristic transit under Los Angeles. He didn’t have to ask the neighbors first.

Alana Semuels explores the intricacies associated with Elon Musk’s boring project in Los Angeles. She highlights the many ways in which innovation is able to bypass the rules and regulations that hamper the development of public infrastructure. For me this is highlighted by fifty year plan associated with transport in Melbourne. I agree with Semuels’ that it would be better to see such time and money spent supporting the state, rather than endlessly trying to circumvent it.

Vicky Warren feels like she’s been attacked from all sides lately. Across the street from her rental apartment in the working-class Los Angeles County city of Hawthorne, noisy planes take off and land at all hours, diverted to the local municipal airport from wealthier Santa Monica, where neighbor complaints have restricted air traffic. On the other side of her apartment, cars on the 105 Freeway sound the frustration of L.A. traffic. She’s even getting assailed within her walls: Termites have invaded so completely that she can’t keep any food uncovered. Flea bites cover her legs; rats are aggressively attacking the boxes she has stored in her garage. So Warren was disappointed, but not surprised, to learn that invaders are coming from underground, too.

I talked to a dozen people who live along the tunnel’s route, and most said they hadn’t witnessed any extra noise or traffic. But none had been informed ahead of time that a private company would be digging a tunnel beneath the street. Some only learned about the tunnel in mid-2018—not when the digging started, in 2017—because the company purchased a dilapidated house on 119th Place for nearly $500,000 in cash.

Yet, in many ways, the tunnel is a triumph of privatization. Plans to extend the Los Angeles Metro system under the Sepulveda Pass first went on the ballot in 2016, after years of planning; the project itself won’t be completed for decades, because of federal and state regulations. Musk just needs to find the money. Since the Boring Company is private, it is able to avoid the years of tedious environmental reviews required when the government tries to build transit. It is also exempt from “Buy American” requirements necessary for projects that receive federal funding. This allows the company to try a new technology much faster than if the government got involved. Musk’s SpaceX was able to lower the cost of space travel through private rocketry, and the Boring Company hopes to do the same for tunneling, a spokesman told me.

Musk seems more interested in finding a convenient test site for a bold idea, one that he believes leapfrogs existing technological options, rather than doing the tedious work of improving an old system.