The very act of calling an event or situation a “crisis” is an exercise of power that closes down an expected future (Wilkinson and Ramirez 2010). Organization theorist Bill Starbuck, who has extensively studied how people learn (or don’t) in crises (2009), noted that the emotional aspects in cognition make it difficult for people to leam from events considered “one-off exceptions” or “rare.” As he put it, “reactions to the uncertainty (of and in rare events) include wishful thinking, substituting prior beliefs for analysis, biasing probability distributions towards certainties, searching for more data, acting cautiously, and playing to audiences. (But sometimes people leam in crises, see Box 3.4 on the Cuban missile crisis of 1962.)


The OSPA suggests that scenario planning can be used to support better shared sensemaking. In crisis situations this shared sense often does not have the time to arise. Because scenario planning allows disagreeing views, it can reveal, compare, and test alternative framings that can help to prevent premature foreclosure on the crisis problem definition, and to instead promote learning as inquiry and reflection

Change during a time of crisis is so interesting. My experience is that people tend to jump straight to (prior) solutions and what we already know. The challenge with this is that they may no longer be applicable. On the flipside, Steve Collis also talks about the risk of trauma about changing too much too fast. Rafael Ramirez and Angela Wilkinson’s discussion of scenario planning and sense making reminds me of Venkatesh Rao’s comparison of map-makers and sense-makers. Rao actually suggests that the notion of something being ‘weird’ is “a sense-making failure in response to a shock.”

Applied to a blog, angkorwatification is a sort of textual equivalent of rewilding. You have a base layer of traditional blog posts that is essentially complete in the sense of having created, over time, an idea space with a clear identity, and a more or less deliberately conceived architecture to it. And you have a secondary organic growth layer that is patiently but relentlessly rewilding the first, inorganic one. That second layer also emerges from the mind of the blogger of course, but does so via surrender to brain entropy rather than via writerly intentions disciplining the flow of words. I’ve seen some other old sites undergo angkorwatification. Some seem to happily surrender to it like I am doing, others seem to fight it, like I won’t.

I really like this idea of ‘angkorwatification’ Venkatesh. I spent years carving out longer elaborations. However, in recent times, I have taken to engaging in ideas and curating my bit of the web. For me, this is another example of developing a blog and how our intent emerges in time.

Map-makers try to make one map that accounts for everything they see happening to things they care about. Then they try to craft narratives on that one map. Maps can be wrong or incomplete, but they aren’t usually incoherent or entropic, because they represent a single, totalizing, absolutely interested point of view, and a set of associated epistemic, ontological, and aesthetic preferences.

Sense-makers on the other hand, try to come at the territory using multiple maps, as well as direct experience. Theirs is not a disinterested point of view, but a relative, multi-interested point of view. We want various points of view to agree in a certain limited sense, lending confidence to our hope that we’ve made sense of reality through triangulation.

Venkatesh Rao finishes his series on weirding as opposed to new normal or temporarily depressed.

When the situation is ambiguous, as it is around the world today, we cannot estimate the proportions of transient weirdness, new normal, and temporarily depressed old normal in the mix.

He concludes with a discussion of the differences between sense making versus map making, and suggests that weird is “a sense-making failure in response to a shock.”

For several years now, I’ve been watching the creeping, unheralded growth of what I call the cozyweb, and for which others have lots of creative names. Kickstarter founder Yancey Strickler called it the Dark Forest in a recent post.

If the relatively peaceful web of the 90s and aughts was about civilian eyeballs, the IoB is about mook-on-mook combat clicks, and is now entering its second decade

In this lengthy post, Venkatesh Rao makes the case for the ‘internet of beefs’, where the focus is on

A beef is a ritualized, extended conflict between named, evenly matched combatants who each stand for a marquee ideological position, and most importantly, reciprocate each other’s hostile feelings in active, engaged ways. A beef is something like the evil twin of a love affair. A beef must be conducted with visible skill and honor (though codes of honor may be different on the different sides), and in public view. Each combatant must be viewed, by his or her supporters, as having picked a worthy adversary, otherwise the contest means nothing. The combatants fight not for material advantage, but for a symbolic victory that can be read as signifying the cosmic, spiritual righteousness and rightness of what they are fighting for. So the conflict must be at least nominally fair, hard to call decisively, and open to luck, cunning cheating, and ex-post mythologizing by all sides, in terms favorable to their own champions.

These arguments are built around a feudal model of knigths, mooks and manors.

Mook manorialism is an economy based on axe-grinding. As the peasantry, mooks do more than fight other mooks. They are also responsible for keeping grievances large and small well-nursed and alive. Occasionally, through an act like whistleblowing or leaking of confidential communications, a mook might briefly become a named player in a particular theater of conflict, but the median mook is primarily expected to keep everyday grievances alive and fight under the glare of algorithmic lights when called upon to do so, unrecognized by history, but counted in the statistics and noticed by the AIs (senpAIs?).

The problem is that there is no way of ignoring or escaping this space.

If you participate in online public life, you cannot entirely avoid the Internet of Beefs. It is too big, too ubiquitous, and too widely distributed and connected across platforms. To continue operating in public spaces without being drawn into the conflict, you have to build an arsenal of passive-aggressive behaviors like subtweeting, ghosting, blocking, and muting — all while ignoring beef-only thinkers calling you out furiously as dishonorable and cowardly, and trying to bait you into active aggression.

It has come to define the modern web.

If the relatively peaceful web of the 90s and aughts was about civilian eyeballs, the IoB is about mook-on-mook combat clicks, and is now entering its second decade

The only way is to foster a new way of being.

We are not beefing endlessly because we do not desire peace or because we do not know how to engineer peace. We are beefing because we no longer know who we are, each of us individually, and collectively as a species. Knight and mook alike are faced with the terrifying possibility that if there is no history in the future, there is nobody in particular to be once the beefing stops.

And the only way to reboot history is to figure out new beings to be. Because that’s ultimately what beefing is about: a way to avoid being, without allowing time itself to end.

This is one of those posts which seemingly forces you to stop and reassess many actions and assumptions. Interestingly, it also inoculates itself against criticism.

One piece that I am left thinking about was my question of tribes from a few years ago. 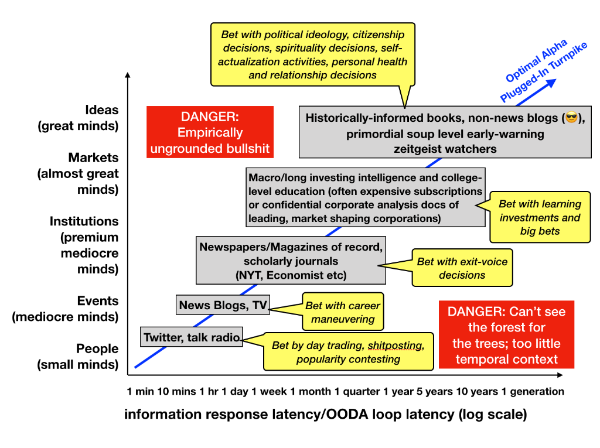 Venkatesh Rao provides a counter-narrative to the argument that we need to abandon social platforms perpetuated by Cal Newport. I think that the challenge is in finding some sort of balance. This is what I tried to capture in my post and I think is touched on in the #ProSocialWeb movement.

Whether you choose a Soft or Hard Waldenponding, and whether you choose it as an occasional break or a regularly scheduled retreat, just recognize that it is not a self-evidently more “moral” attitude then getting your mind all dirty and entangled in the “toxic” information streams.

We are all now part of a powerful global social computer in the cloud that is possibly the only mechanism we have available to tackle the big problems of the world that industrial age mechanisms are failing to cope with. We might as well get good at it. Do your part. Stay as plugged in as you can.

The idea is that in a complex game, after most players have finished a first full play-through, the mechanics might still leave interesting things for them to do. An Act 2 game-within-a-game emerges for experienced players who have exhausted the nominal game. A game dominated by such second-order players is an elder game. In Borderlands, the elder game was apparently gun collecting. […] An elder game can be contrasted with a late style, which is a style of creative production taken to an extreme, past the point of baroque exhaustion, in a sort of virtuoso display of raging against the dying of the night. Late-style game play is an overclocked finite game resisting the forces of mortality. An elder game is a derivative infinite game, emergent immortality hacked out of mortality.