Learn about synthesizers via Ableton’s interactive website. Play with a synth in your browser and learn to use the various parts of a synth to make your own sounds.

Ableton provide an playground space that serves as an online synthesiser, as well as a teaching tool.

Emulation of the Roland Juno-106 analog synth. Contribute to stevengoldberg/juno106 development by creating an account on GitHub. 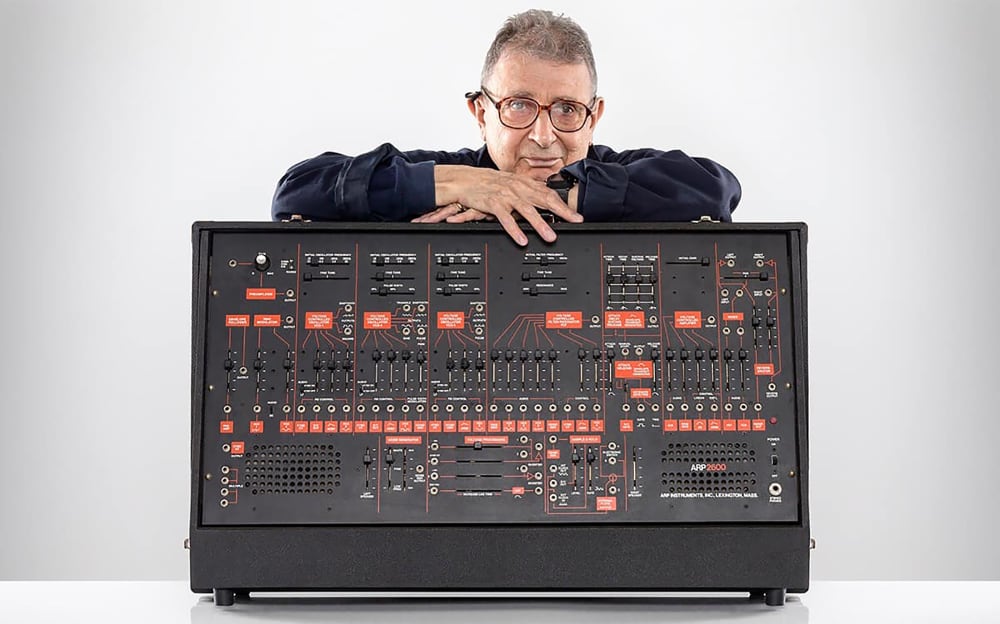 In 2020, Korg reissued the legendary ARP 2600. First released in 1971, this synth has been used by massive musicians like Herbie Hancock, Stevie Wonder, Edgar Winter, Pete Townshend, and many, many others. We at Reverb partnered with Korg in the wake of this exciting news to produce a short documentary about this history of this stalwart semi-modular synth, featuring interviews with figures across the synth world.

With Korg’s rerelease of the ARP 2600, Reverb speak with a range of people, past and present – Richard Devine, Marc Doty, David Friend, Brian Kehew, David Mash, LaMar “Kronick” Mitchell, Dina Pearlman, Ariel Rechtshaid, Robert Stambler and Edgar Winter – about the creation of the synthesiser and its legacy.

One thing that I was intrigued by was the ability to control the synthesiser with the guitar.

It’s become the instrument which is almost like a voice, there are different sort of sounds that are made from different ways of playing and it’s like . . . you can recognize guitarists.
So there’s always that bit of humanness, if you like, but it’s only a breaking off point because a guitar is not that much just a guitar, but once it becomes electrified it’s turned into a giant instrument which can play to 60,000 people. It can also do a lot of other things, a guitar can be the control center for a synthesizer. A guitar can go into a synthesizer and have its sound taken apart and put back together again in a different form, so that you’re playing the guitar, but the actual sound that comin’ out is a completely different thing. On the album, on Who’s Next, there’s a very simple one which we use with the ARP synthesizer called an envelope follower, where you plug the guitar in and you get a sort of fuzzy wah-wah sound.

That’s on Going Mobile. So that’s how you get that incredible sound.

But the guitar itself was controlling the amount of filter sweep. When you hit the note the filter went Bwaaumm! And when the string stopped the filter closed so you got nothing.

I wondered this when I bought my Korg Volca Modular. However, after reading about this question in regards to Moog’s, I wonder if my initial issue related to my amp/preamp:

Many of our instruments have a 1/4 input that will accept guitar level signals.  The most immediate and direct way to use a guitar or other string instrument (that has a pickup) with a synthesizer, is to plug it into this EXTERNAL INPUT jack, to take advantage of the built in ladder filter found on most of our instruments.  Keep in mind, that in this scenario, you are using the synth like a guitar pedal or studio effects processor to do things like roll off the high frequency content, add resonant feedback, or achieve tremolo like movement.*

I really like my Volca Modular and have been looking at the Volca Sample. What ones are you looking at?

I’ve not been able to play with the Behringer TD-3 yet as it ships with a euro plug (some adapters are on order along with an assortment of cables) but I’ve been getting to grips with the Korg Volca Drum, figuring out what it’s capable of and generally making noise.

I too have turned to the physical in regards to instruments. I bought the Volca Modular. I think I am getting my head around it, partially because of the time spent tinkering with VCV Rack.

I have been looking at getting a Volca Sampler 2 to compliment it and provide some rhythmic contrast. One of the issues I have is finding a power supply that would work for multiple Volcas. Just not sold on the cost of the Korg adaptor, especially when I would have to buy two. Wondering if you bought the official adaptor or if you are just running off batteries?

Coming soon: a guide to getting started building your own synthesizers! I have some info on my website, but it mostly relates to my particular modular synthesizer and doesn’t really address how to actually get started, what tools you need, where to find circuits, etc. I’d like to change that and…

This sounds fantastic Chris. Definitely interested. Just need to get me a workshop too

Here’s a podcast on the history of electronic music, suitably called A History Of Electronic Music.

I remember first listening to this podcast from Paul Sheeky years ago. In a series of episodes he charts some of the technology and movements. I returned to it recently spurred on by the work of Chris Beckstrom and the Melbourne Electronic Sound Studio (not that I have been). Along with the compilation OHM: Early Gurus of Electronic Music and the documentary Synth Britannia, this podcast is a great resource for appreciating the history associated with electronic music.

The heart of MESS is the MESS Studio, a fully functioning sound production workshop representing one of the most unique, eclectic and historically significant collections of electronic instruments in the world. Working from within the studio is the MESS School, a place for people to engage with the history, technique and artistry of electronic sound and music creation presented in a format that is flexible, affordable and artist driven. Work created at the studio and school is supported by MESS Show to promote unique performance events and recording releases reflecting the diversity of sound created at MESS alongside historical releases from the vault of Australian electronic music . Finally MESS Schematic not only maintains the instruments in the MESS Studio collection, it also offers a space for the development of new instrument ideas focussing on design, engineering and construction.

I remember watching a YouTube video a few months ago with Jack Antonoff showing up his elaborate setup. I thought it would be fascinating to actually see all the original equipment. I did not realise that I had such a space in my own city. The list of equipment is phenomenal. Definitely going to be looking into this further.

Today, contemporary pop music has fully incorporated acid house’s sonic range, if not its production method. Producers used it as a starting point for the sound of R&B and hip-hop in the new millennium—in 2000, Timbaland’s backing track for Aaliyah’s “Try Again” used a TB-303 for its bass line, inspiring countless producers to imitate the sound on other synthesizers and computers. For his part, Pierre sees something prophetic in the name that he and Earl Smith chose for their work: Phuture. “Twenty-six years later and acid is still going strong,” he said in 2011. “You can see the proof of this when platinum-selling groups and artists like LMFAO and Skrillex are putting ‘acid’ in their songs.”

Shuja Haider talks about the sounds and methods associated with Acid House music. Along with the TR808, this article documents the place of the TB303 on modern music.

The cold weather has arrived which means it’s time to transition from mostly outdoor activity to mostly indoor activity. I’ve been working on some electronics projects, perhaps gearing up to sell some of my creations (stay tuned!).
In the meantime, I’ve started working on a new modular synthes…

It is not really possible (at least thus far) to build an analogue copy of a Roland TR-808 without these specific transistors. Some clones have been released and some people have even attempted to build a DIY version using standard 2SC828’s and they discovered that it sounds very wrong. That’s because there is no transistor or zener diode on the planet that has the exact noise spectral profile and output level of the 2SC828-RNZ transistors from the specific 1970’s batch that was used in the production of the TR-808. If the transistor fails in a TR-808 it must only be replaced with a transistor from that original batch or it will no longer sound like a healthy TR-808. When Roland ran out of them they had to discontinue production of the instrument because the noise characteristic of these transitors is crucial to the all important snare and hand clap sounds and that white noise is also then filtered into pink noise for other sounds in the instrument. If you put a standard 2SC828-R into a TR-808 in place of the noise selected part the sound completely changes. As mentioned earlier in the article these transistors are in fact not technically speaking 2SC828’s, if they were they would not have been rejected so putting a 2SC828 in place of Q35 is futile, it’s the wrong part. Fortunately the transistor is not prone to failing so if you own an original 808 then it’s not something you should worry about.

This post on the history of the 2SC828-R transistor central to the Roland TR-808’s sound reminds me of Steven Johnson’s podcast that explored stretching instruments to breaking point. I am intrigued at the idea that to get the sound, Roland sort transistors that were deemed to be ‘out of specification’.