Second-hand clothing has emerged as a $175 billion global business. Now the brands that make the clothes being re-sold want a cut of the action.

The internet consumes a lot of electricity. 416.2TWh per year to be precise. To give you some perspective, that’s more than the entire United Kingdom.

A site designed by Wholegrain Digital on how to measure the impact of a site on the planet. Tom Greenwood also provides some tips on making your site more energy efficient. This is something I have been wondering about recently, especially in following Doug Belshaw’s work on his site.

Design a sustainable city for the future

Daniel Summerell shares a unit of work that involves working collaboratively to design a city of the future within Minecraft. This intended to be self-managed and focuses on engaging with the UN’s Sustainable Development Goals.

What are the practices which will leave the world better than it is now? What are the aspects of our environment that we wish to encourage, compared to those we want to avoid? How can we ensure that the things we like become the norm by the time our grandchildren arrive?

Don’t get firewood from the fruit-bearing trees. Strip the bark from the poisonous ones.

Alex Hern discusses Charles C. Mann’s book on Americas before Columbus. He reflects on the impact of smallpox, as well as the misunderstanding of how the Amazonians learnt to live with nature, rather than strip it back.

Mann suggests, the Europeans were wrong. They had quite literally failed to see the forest for the trees. The environment laden with fruit, vegetables and calories wasn’t something that happened to people: it was the result of people. The lush, dense rainforest, so alien to Europeans hacking through it with machetes, was not actually a tabula rasa, any more than the American northwest. It was, instead, the result of an independent invention of agriculture – and an agriculture quite unlike any other in the world.

Interesting to consider alongside Beau Miles’ work and his appeal to radical change.

Human civilization has a waste problem, and it’s likely to get worse as population levels grow and a consumerist mentality becomes the global norm. But there are many clever, practical ways to deal with waste, including bioremediation – a nature-inspired approach.

Your content site probably doesn’t need JavaScript. You probably don’t need a CSS framework. You probably don’t need a custom font. Use responsive images. Extend your HTTP cache lifetimes. Use a static site generator or wp2static.com instead of dynamically generating each page on the fly, despite never changing. Consider ditching that third-party analytics service that you never look at anyway, especially if they also happen to sell ads. Run your website through websitecarbon.com. Choose a green web host.

Danny van Kooten unpacks the environmental impact of a website. I came upon this via Doug Belshaw and his decision to change his WordPress theme. It also touches on Clive Thompson’s post on sustainable web design.

It was time for me to update my blog theme, so I had a look through the WordPress theme directory (yawn) and then through GitHub. I tried a few for size, and settled on Susty, a theme which is less than 7KB in size. That’s tiny.

I like your intent her Doug. Somewhat wedded to the IndieWeb and the handful of associated themes, it is not something I think about. However, I wonder about, especially after reading Clive Thompson’s recent piece on sustainable web design.

I was also intrigued by Jim Groom’s piece on managing your cloudlets by turning applications off when you are not using them on Reclaim Cloud. Although Groom’s focus was on cost, I think this too has a sustainable focus as well.

If cellphones were a species, would this be a symbiotic relationship or would we would be the hosts in a parasitic relationship where the phones benefited more from us than we benefit from them?

As much as mobile phones are essential (as I write this response on one), I wonder if they are sustainable? Do we need new ones all the time? Could we do more in regards to materials?

On a side note, are the plethora internet of things that fill every gap in our life with data essential? It was interesting reading about decarbonising as a possible approach to sustainability of environment and our privacy. 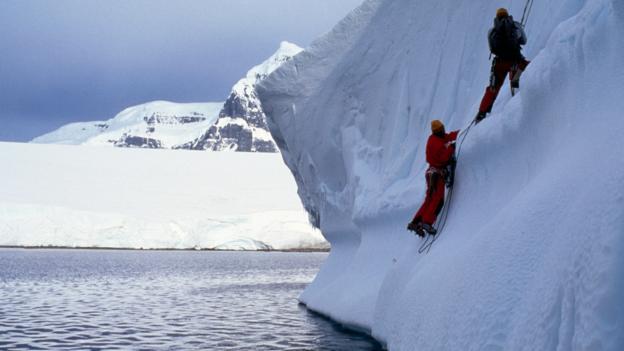 Some experts are seriously considering a proposal to harvest Antarctic icebergs and haul them to Cape Town. What are the chances it will succeed?

Whatever its other ethical contortions, Silicon Valley has an environmental conscience. Facebook has pledged to, sooner or later, power its operations using “100% clean and renewable energy”. Google says it has already achieved that goal. So does Apple. Yet even if you factor in efficiency improvements, beneath many of these claims lies a reality in which the vast and constant demand for power means such companies inevitably use energy generated by fossil fuels, and then atone for it using the often questionable practice of carbon offsetting.

Green innovation comes in many forms. And promising project don’t have to be big, they only have to make a start.

This episode of Future Tense captures a number of projects currently being explored associated with sustainability.