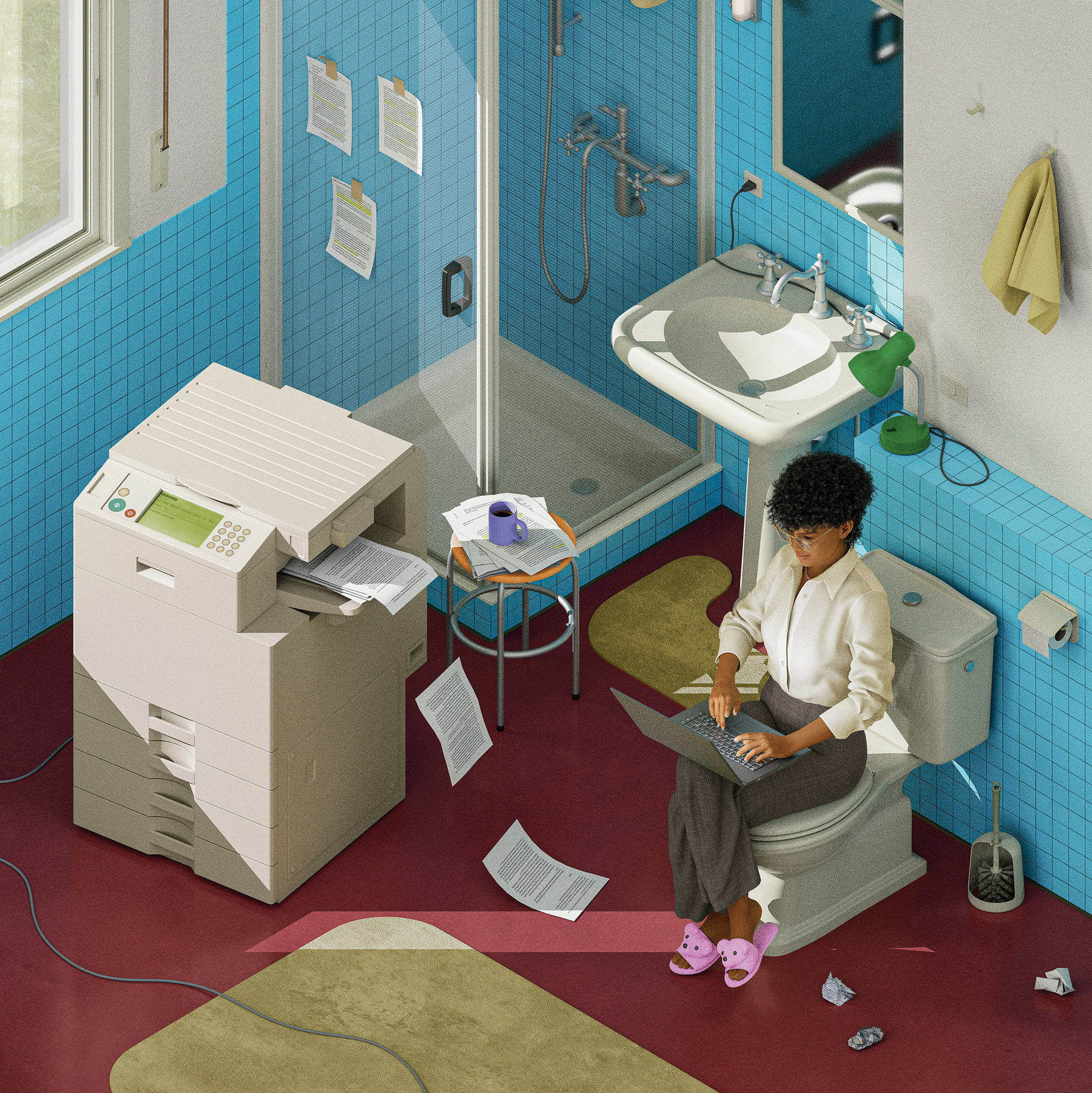 The coronavirus crisis is forcing white-collar America to reconsider nearly every aspect of office life. Some practices now seem to be wastes of time, happily discarded; others seem to be unexpectedly crucial, and impossible to replicate online. For workers wondering right now if they’re ever going back to the office, the most honest answer is this: Even if they do, the office might never be the same.

Clive Thompson breaks down a number of stories and challenges associated with the move to remote working. He explores how sales has moved online, with adjustments to the pitches, including a focus on lighting and virtual background. He unpacks the changes associated with balancing work and personal in the same space. A key part of this is the use of a range of productivity tools and adjustments to the way we work.

Like Estenson, they had, over weeks of experimentation, begun to recognize and adjust to the strengths and weaknesses of their various communications tools. Zoom meetings carried a whiff of formality, since they were preplanned — with a link to join sent around — so it felt like filing into a conference room: useful for talking business, but a bit stiff for batting around ideas between two people. So, for quick, one-to-one talks, they gravitated to a feature in Slack that enables video calls between two users. Someone who saw a colleague logged into Slack — signaled by a green dot beside the name — could instantly request a video chat. It was more like popping your head over a cubicle wall unannounced, to engage a colleague in an impromptu two-minute confab. Tracy Coats, the company’s director of partnerships, said she had become an ardent fan of this practice.

The reality is that remote work can present a certain paradox. You can feel removed from colleagues even while drowning in digital messages from them. Associated with this, many feel fatigue due to the preformative aspects of being a part of video conferences all day long.

Video chat also makes it harder to achieve “synchrony,” a sort of unconscious, balletic call-and-response that emerges when two people are in the same room. In this situation, we often mimic someone’s body posture without realizing it and scrutinize tiny bits of facial timing — noticing, say, when the other person is about to smile.

Another problem is that there is more effort required when online.

Research suggests that people find it harder to build cohesion and trust online. David Nguyen says his academic research found that “in a videoconferencing situation, trust is actually quite fragile.” Work by him and others in the field shows that people more readily form cooperative bonds when they are face to face, whereas in video “trust is diminished overall,” he says. “Trust grows a little slower than in face-to-face conditions.”

This is something that Mike Caulfield touches on in regards to the delivery of content.

It is interesting to consider this alongside Ben WIlliamson and Anna Hogan’s work in regards to the evolution of the global education industry during the pandemic.

Why are we always assuming a distributed workforce is a good thing for the worker?

Sean Blanda provides a different perspective on remote work. He discusses the focus on tasks, rather than time; the ways in which people can become forgotten; the creation of a culture of disruption; and a disruption to career growth. In response, Blanda believes companies should be encouraged to invest in the cities in which they are based, managers should trust employees to manage their own schedule, and remote work should be opt-in rather than required.

Some of this reminded me of Peter Ford’s Rise of the Robots, where he talks about offshoring as the first step towards automation.

As technology advances, we can expect that more and more of the routine tasks now performed by offshore workers will eventually be handled entirely by machines.

In an age when community-based social ties are increasingly frayed, the office is where many adults interact with other adults. Perhaps, encoded in our genes after millennia of tribal coöperation, there is instinctual excitement at working side by side with others toward a shared goal. An e-mail that reads “Job well done!” is not the same as a smile. These benefits of the office—these subtle affirmations of our humanity—were easy to overlook, until we abruptly found ourselves deprived of them.

In addition to this is the problems associated with communication, collaboration and coordination when working offsite.

In some respects, we may be in an electric-dynamo moment for remote work. In theory, we have the technology we need to make remote work workable. And yet most companies that have tried to graft it onto their existing setups have found only mixed success. In response, many have stuck with what they know. Now the coronavirus pandemic has changed the equation. Whole workplaces have gone remote; steam engines have been outlawed. The question is whether, having been forced to embrace this new technology, we can solve the long-standing problems that have thwarted its adoption in the past.

Remote work is a complex problem. Although it may have many boons, some will still prefer the work-life balance associated with office life.

Remote work is complex, and is no cure-all. Some of the issues that have plagued it for decades are unlikely to be resolved, no matter how many innovations we introduce: there’s probably no way for workplaces to Zoom themselves to the same levels of closeness and cohesion generated in a shared office; mentorship, decision-making, and leadership may simply be harder from a distance. There is also something dystopian about a future in which white-collar workers luxuriate in isolation while everyone else commutes to the crowded places. For others, meanwhile, isolation is the opposite of luxury. There may be many people who will always prefer to work from work.

In some respects, this reminds me of the discussion often made about changing and transforming learning spaces in school. The reality is that for a new space to work it usually involves new practices to go with it. As Matt Esterman suggests,

I’m forming the theory that what most teachers want is a more shiny version of what they have. This is because they are not trained as designers (usually) and are so often hemmed in by the expectations of current reality that they don’t have the time or inclination to think about how things could be different.

The coronavirus has brought about a change where I have worked at home this week. What has been interesting is that although the physical space is different, what has stood out has been the implied responsibility and autonomy. I have missed speaking w/ colleagues whenever required, however it has made me more mindful of how I communicate.

Never before in human history has it been so easy to do so much without going anywhere. Cinema box-office receipts fell sharply in 2019, as streaming entertainment became more plentiful and high quality. Apps and games and podcasts and digitally delivered matter of all kinds have followed suit. Now, absolutely drowning in it, the last thing anyone might worry about is getting bored at home.

Ian, this successfully captures why we should not necessarily fear cancelling everything.