I love that the fediverse exists. And I have the utmost respect for the gargantuan effort that’s going into it.

And yet, I am also very concerned17 that the design decisions that have been made incentivise centralisation, not decentralisation. I implore us to acknowledge this, to mitigate the risks as best we can, to strive to learn from our mistakes, and to do even better going forward.

So to the ActivityPub and Mastodon folks, I say:

Consider me your canary in the coal mine…

Aral Balkan reflects upon the perils of managing his own instance of Mastodon. He explained the ever present dangers of denial of service and the challenges associated with this. (Personally, I experienced this in part once when Balkan shared a link to a post I had written.)

The big issue according to Balkan is the incentive to join an instance that seemingly absolves users of such problems, this however just kicks the can down the road. For Balkan, instances should be limited from getting too big and ideally we should all have our own instance linked to our own domain, the ultimate form of verification.

I have tinkered with using my site as an ‘instance of one‘. Although I liked the idea, I could not get it all to work how I would prefer, so I persisted with my POSSE approach. This also have me thinking about Jim Groom’s reflection on life in the cloud. I guess the reality is that there is always a cost.

People fleeing Twitter have turned to Eugen Rochko’s alternative. He says social networks can support healthy debate—without any one person in control.

In an interview with Will Knight, Eugen Rochko discusses the current move to Mastodon, Musk’s free publicity and the differences with Twitter. Rochko also explains why the same thing that has happened with Twitter cannot happen with Mastodon.

What if someone—say an impulsive billionaire—wanted to buy Mastodon or take control of it somehow?

The network is protected from something like that. The code is free, open-source software, and nobody can change the license or take it back retroactively, and all of the different servers are owned by other people. Somebody could buy Mastodon gGmbH [the German nonprofit that maintains the software] and with it the trademark and the servers we run—mastodon.social and mastodon.online—but it wouldn’t affect the Fediverse in any significant way.

In other pieces on Mastodon, Clive Thompson suggests that it is an example antiviral design that encourages murmuring conversations, rather than the must-see post.

And I’ve realized that Mastodon is a superb example of antiviral design.

It was engineered specifically to create friction — to slow things down a bit. This is a big part of why it behaves so differently from mainstream social networks.

Jeremy Keith compares the exodus from Twitter to being at Dunkirk.

Wouter Groeneveld wonders if social media scrolling is the answer, something I have been wondering about for a while.

I don’t really know what I’m trying to say here except that it’s perhaps not worth it to scroll endlessly on yet another social media platform where posts are starting to converge into the emptiness that Twitter had to offer.

Jim Groom and the team at Reclaim Hosting have documented how to setup your own instance.

I’ve been tinkering around with methods to automatically syndicate (POSSE) content from my personal website to Mastodon. I’ve been working at making a custom plugin which is far from finished. But a test post I made the other day, caught a few people’s attention[1][2].

Thank you for sharing Chris. I was wondering what you were doing. Might be time to dig back in again.

Using our axes, we can analyze what makes decentralized logic distinct:

Ethan Zuckerman and Chand Rajendra-Nicolucci explore the possibilities of decentralised models to respond to social media, especially in regards to the challenges of moderation.

Decentralizing governance means that a diverse array of communities with different norms and standards can arise. For example, Mastodon is home to instances with strict harassment policies while also being home to the instance that hosts the vitriolic and far-right Gab. This is sustainable because users and servers can choose who to connect with. So, when Gab forked Mastodon or ISIS recruiters joined Diaspora, most servers simply blocked all content originating from the offending servers and accounts. Gab users can see their server and the few that are willing to federate with it; the rest of the Mastodon universe has functionally closed themselves down to Gab and its content.

I see my main role in the network right now is to try and provide value-added information to my network in the hopes that someday others may be convinced to begin doing the same. This is how PLN’s are built, one person at a time adding value with intent. Participating. Contributing.

How do you build a PLN? First, it is important to overcome the hesitation around “using” people. If you are building a PLN, you will always be in a reciprocating relationship with the others in the network. Ideally, you should feel that your main job in the network is to provide value-added information to those who can, in turn, increase your learning (Digenti, 1999).

This will be a long process. But then again, relationship building always is.

Clint, I am enjoying your exploration of Mastodon and what is required. Someone else who has challenged me about both Twitter and Mastodon (and Micro.Blog) has been Ian Guest. He asked that question as to what I wanted out of any of these groups. I think that you touch upon this with your discussion of PLN. One thing that I do not think that I have thought about enough is how a PLN can change and evolve. Some people go, others stay. It is all rather fluid. Although I am willing to discuss all the technicals, maybe this focus on ‘EdTech‘ misses the purpose. Maybe this is Douglas Rushkoff’s point about ‘Team Human‘?

Thank you as always for the provocation.

One strategy will be to actively participate on Mastodon more than Twitter. I’ve had a Mastodon account for the past couple of years and have been somewhat active in that space, trying to maintain a presence there as I really like this model of a decentralized social media network where it is possible for a small group to host their own instance and connect their Mastodon instance to other Mastodon instances. I have used the user-supported Mastodon.Social site for the past few years, but would really like to explore with the OpenETC this year what it might take to host our own instance of Mastodon within the OpenETC specifically for educators within BC to have their own Mastodon account.

Clint, I found Laura Kalbag’s discussion of instances useful. Also, Neil Mather wrote a reflection on setting up Activity Pub on his site. I am just unsure if I am then able to use the native app with Mastodon. Still exploring that.

Now you know why I’m moving away from Twitter, you probably have a vague idea of what I’m looking for in a social network. Mastodon is unique for a few reasons: it is federated, ethical, and inclusive.

Laura Kalbag discusses Mastodon, what is a federated network and how to setup your own instance of one.

But posting status updates to a blog misses the social element of social networks. We don’t just use social networks to shout into the void, we use them to share experiences with each other …

I have my own Mastodon instance, mastodon.laurakalbag.com where it’s just me (and Oskar). This is referred to as an “instance-of-one.” It’s hosted on my own domain, so I own and control everything I post on there, but because I have the Mastodon installed on there, I can see what other people post on their Mastodon instances, and reply to them with mentions, or favourite and boost (like retweet) their toots, even though they are on different instances. It’s like having my own Twitter which can talk to other Twitters, where I make the rules.

This touches on my discussion of a ‘social media of one‘.

Spent a few minute to finally set up my website with Brid.gy so that it’s now pulling responses back from Mastodon. It’s so nice to see all the interactions that were once “lost” to me coming back to live with their proper contexts on my website.

For those looking to tinker with their websites as it relates to interacting with Mastodon, the IndieWeb has a reasonable number of potential options in addition to your ability to roll your own.

Chris, after reading Laura Kalbag’s post, I am wondering if I need to just dive in and go all bridgy.fed and continue my exploration of the social media of one.

Mastodon is now on Bridgy! Both backfeed and publish (aka POSSE) are fully supported. Feel free to try them out! And let me know if you hit any bugs, problems, or missing features.

This is great, thank you Ryan.

This week’s microcast is about Mastodon and federated social networks.

I enjoyed this Doug. I am not sure where I fit within Mastodon and the fediverse. I have been thinking of trying the IndieWeb instance, however I just don’t have the same sense of community that I found on Twitter.

Also, I use Granary to generate an RSS feed from my Twitter lists.

Hey all I am kind of migrating to indieweb.social instance to test @tchambers experiments. #mb

Yes, many start on https://t.co/Szd9gTNiJY and then find an instance more reflective of their community. Importing and exporting users gets to be a pain.

But you can make your own Domain your Fediverse instance with a bit of work. (https://t.co/6M3a1MKHUI)

Greg, do you have any recommended resources for walking through the process of setting up your own instance? 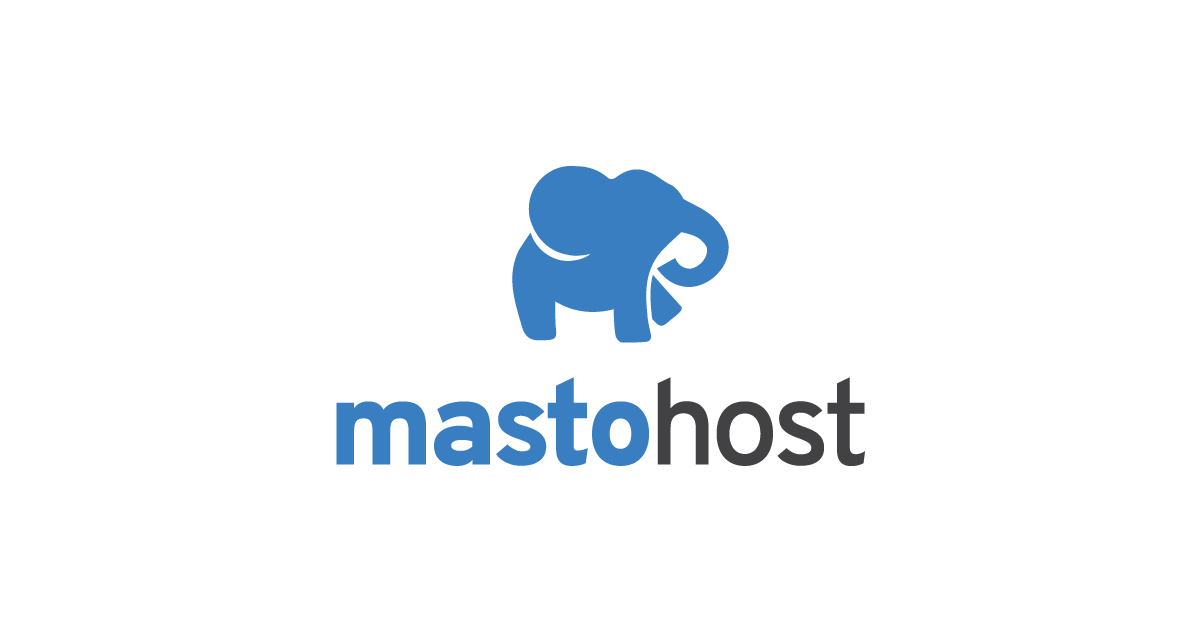 Fully managed Mastodon hosting how it works
Masto.host was built from the ground up to make running a Mastodon instance easy. view details pricing
For only €5/month you can have your own Mastodon instance.

Remix this glitch.
Get a Mastodon API token.
Put it into .env (don’t worry, it’s hidden from non-collaborators).
Configure UptimeRobot to hit the /check endpoint.

h/t qubyte on GitHub:
I made a glitch over lunch to periodically check my…

Chris, wondering if you could provide clarification on his /check endpoint. I am still learning that side of things (still haven’t dived into WebSub side of things.)