There are two senses, both far more meaningful than the Harvey Mansfields of the world can afford to realize, in which men actually are failing to protect the people around them. One, many of us commit violence against women and each other, and the rest of us stand accused, with more or less justice depending on our individual circumstances, of letting those guys get away with it. (Feminists sometimes seem to me to exaggerate the amount of power men have over each other. If you’ve marked yourself as the sort of man who objects to casual rape or wifebeating, the men likeliest to do those things tend not to invite you over—but most of us could do more than we do.) Two, we sit around too much. Nothing has informed my understanding of my own maleness—or my fears about what it might allow me to get away with—than chancing to look through the sociologist Arlie Russell Hochschild’s The Second Shift when I was in my twenties, and seeing clearly laid out the total combined hours of precious life the average woman loses to home and office.

Phil Christman’s lengthy piece on being a man is a fascinating read alongside Annabel Crabb’s The Wife Drought. Cory Doctorow suggests that,

There’s been an ocean of ink spilled over “toxic masculinity” but until I read Phil Christman’s “What It’s Like to Be a Man” in the Hedgehog Review, I couldn’t crisply define it.

It used to be that these regressive values were the norm. So I want to spend this International Men’s Day thanking the women who have helped changed this state of affairs, as well as the men who refuse to live by them, and who signal that there are other, better definitions of masculinity. This change is saving people’s lives. It probably has saved mine. So, thank you.

We keep asking, ‘Why doesn’t she just leave?’ But for Jess Hill, who spent four years investigating domestic violence, the more confounding question is, ‘Why does he stay?’

Jess Hill’s investigation into male’s and violence is an interesting read alongside Tin Winton’s discussion of masculinity.

Seriously: if your masculinity is THAT threatened by an ad that says we should be nicer then you're doing masculinity wrong.

How do we see masculinity reflected and reinforced in children’s literature?
Is boys will be boys toxic? 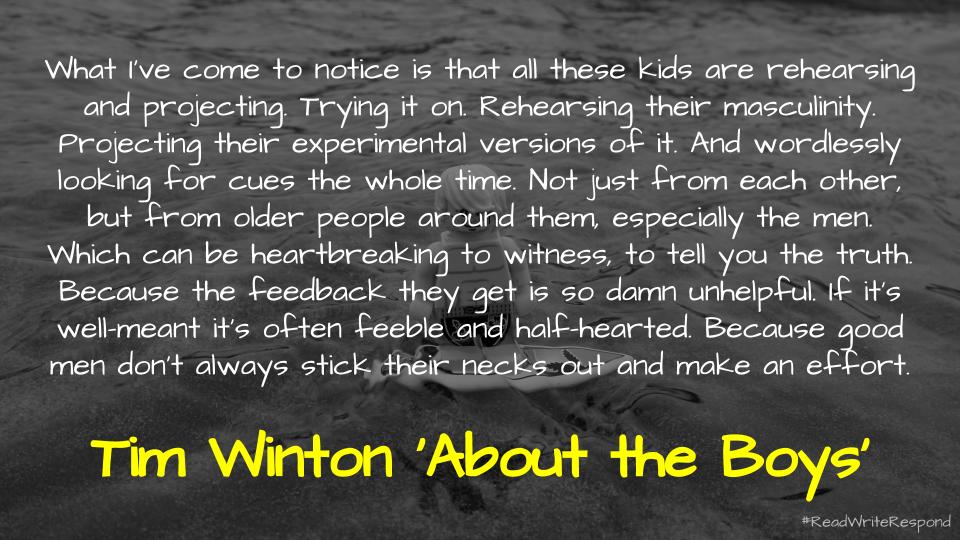 What I’ve come to notice is that all these kids are rehearsing and projecting. Trying it on. Rehearsing their masculinity. Projecting their experimental versions of it. And wordlessly looking for cues the whole time. Not just from each other, but from older people around them, especially the men. Which can be heartbreaking to witness, to tell you the truth. Because the feedback they get is so damn unhelpful. If it’s well-meant it’s often feeble and half-hearted. Because good men don’t always stick their necks out and make an effort.

In a speech about a new book The Shepherd’s Hut, Tim Winton says that it is men who need to step up and liberate boys from the culture of toxic masculinity that has come to mark Australian society.

In the absence of explicit, widely-shared and enriching rites of passage, young men in particular are forced to make themselves up as they go along. Which usually means they put themselves together from spare parts, and the stuff closest to hand tends to be cheap and defective. And that’s dangerous.

Toxic masculinity is a burden to men. I’m not for a moment suggesting men and women suffer equally from misogyny, because that’s clearly and fundamentally not true. And nobody needs to hear me mansplaining on the subject of the patriarchy. But I think we forget or simply don’t notice the ways in which men, too, are shackled by misogyny. It narrows their lives. Distorts them. And that sort of damage radiates; it travels, just as trauma is embedded and travels and metastasizes in families. Slavery should have taught us that. The Stolen Generations are still teaching us. Misogyny, like racism, is one of the great engines of intergenerational trauma.

Along with Molly Ringwald’s reflections on the problematic art of John Hughes and Phil Cleary’s post on the misogynistic subculture of football, they represent a challenge for equity.

It is also interesting reading these pieces alongside Kate O’Halloran’s article on the fear associated with women exercise.

One of the biggest issues for women was the difference between theirs and men’s “entitlement” to space. At 53, [Lisa Schuppe] is a keen surfer, but has only recently taken up the sport again after her experience as a girl who wanted to surf just like her friends who were boys – but was instead treated inequitably.

Here is a longer version of the speech