I know a lot of media personalities, Twitter "influencers", or whatever have shared their treatment of the Mueller Report today. I'm a big ol' nerd, so here's what I'm doing with all this delicious, delicious data.

Yes, it's a thread. Because I'm doing something different.

This provides an insight into the “messy, dirty truth of data science” and machine learning. You can find more information here.

I think there’s a lot to say about machine learning and the push for “personalization” in education. And the historian in me cannot help but add that folks have trying to “personalize” education using machines for about a century now. The folks building these machines have, for a very long time, believed that collecting the student data generated while using the machines will help them improve their “programmed instruction” – this decades before Mark Zuckerberg was born.


I think we can talk about the labor issues – how this continues to shift expertise and decision making in the classroom, for starters, but also how students’ data and students’ work is being utilized for commercial purposes. I think we can talk about privacy and security issues – how sloppily we know that these companies, and unfortunately our schools as well, handle student and teacher information.


But I’ll pick two reasons that we should be much more critical about education technologies.

In some prepared remarks, delivered on a panel titled “Outsourcing the Classroom to Ed Tech & Machine-learning: Why Parents & Teachers Should Resist” at the Network for Public Education conference in Indianapolis, Audrey Watters highlights two major points of concern. Firstly, (ed)tech is a black box providing little understanding of how to works. While secondly, AI is biased. Machine learning is better considered as machine predictions.

Anytime you hear someone say “personalization” or “AI” or “algorithmic,” I urge you to replace that phrase with “prediction.”

Ready or not, technologies such as online surveys, big data, and wearable devices are already being used to measure, monitor, and modify students’ emotions and mindsets.

Benjamin Herold takes a dive into the rise of edtech to measure the ‘whole’ student, with a particular focus on wellbeing.

For years, there’s been a movement to personalize student learning based on each child’s academic strengths, weaknesses, and preferences. Now, some experts believe such efforts shouldn’t be limited to determining how well individual kids spell or subtract. To be effective, the thinking goes, schools also need to know when students are distracted, whether they’re willing to embrace new challenges, and if they can control their impulses and empathize with the emotions of those around them.

Something that Martin E. P. Seligman has discussed about in regards to Facebook. Having recently been a part of demonstration of SEQTA, I understand Ben Williamson’s point that this “could have real consequences.” The concern is that all consequences are good. Will Richardson shares his concern that we have forgotten about learning and the actual lives of the students. Providing his own take on the matter, Bernard Bull has started a seven-part series looking at the impact of AI on education, while Neil Selwyn asks the question, “who does the automated system tell the teacher to help first – the struggling girl who rarely attends school and is predicted to fail, or a high-flying ‘top of the class’ boy?” Selwyn also explains why teachers will never be replaced. 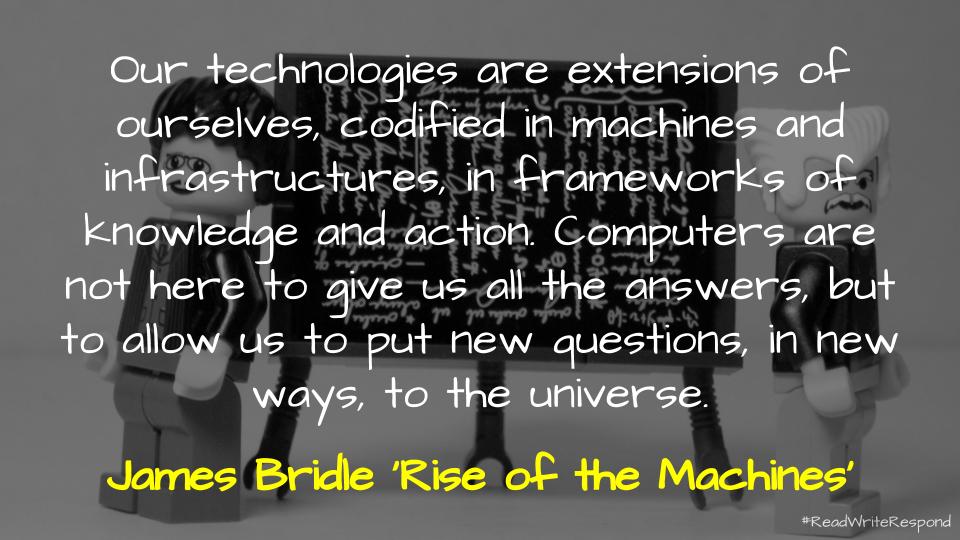 Technology is starting to behave in intelligent and unpredictable ways that even its creators don’t understand. As machines increasingly shape global events, how can we regain control?

In an extract from James Bridle’s new book New Dark Age: Technology and the End of the Future, he discusses the evolution of the machine. This includes the place of the cloud, algorithmic interactions within the stock marker, the corruption of the internet of things and incomprehensibility of machine learning. Bridle believes that we need to reimagine how we think about technology:

Our technologies are extensions of ourselves, codified in machines and infrastructures, in frameworks of knowledge and action. Computers are not here to give us all the answers, but to allow us to put new questions, in new ways, to the universe

This is a part of a few posts from Bridle going around at the moment, including a reflection on technology whistleblowers and YouTube’s response to last years exposé. Some of these ideas remind me of some of the concerns raised in Martin Ford’s Rise of the Robots and Cathy O’Neil’s Weapons of Math Destruction.

Well, amazing things happen when you dump that repository of info into one of the world’s best machine learning engines.

I find all these seemingly incidental combinations intriguing for lack of a better word. When Google hit the books, is this what they had in mind? I was reading today about the move away from ‘research’ to ‘AI’. I wonder what the consequences of Sidewalk Labs on military surveillance?

Machine learning often boils down to the art of developing an intuition for where something went wrong (or could work better) when there are many dimensions of things that could go wrong (or work better). This is a key skill that you develop as you continue to build out machine learning projects: you begin to associate certain behavior signals with where the problem likely is in your debugging space. 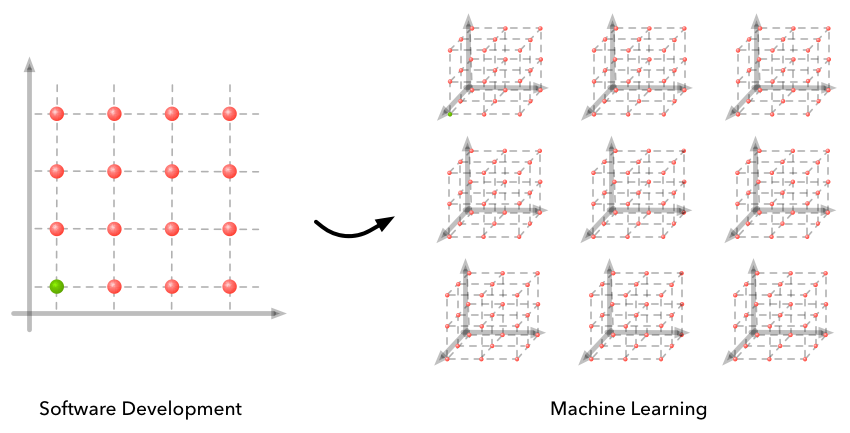 We know that behaviors can be modified, as a social species we use all kinds of narratives and manipulations to modify behavior. The question is who is trying to modify them and to what purpose. Me debating with myself about machine learning.

I always thought that the best ‘thought experiment’ was and is fiction. Maybe Google should read The Circle. As I watched The Selfish Ledger I wondered how much it would cost to be removed from the grid?

Are the systems we’ve developed to enhance our lives now impairing our ability to distinguish between reality and falsity?

This is an interesting episode in regards to augmented reality and fake news. One of the useful points was Hany Farid’s description of machine learning and deep fakes:

When you think about faking an image or faking a video you typically think of something like Adobe Photoshop, you think about somebody takes an image or the frames of a video and manually pastes somebody’s face into an image or removes something from an image or adds something to a video, that’s how we tend to think about digital fakery. And what Deep Fakes is, where that word comes from, by the way, is there has been this revolution in machine learning called deep learning which has to do with the structure of what are called neural networks that are used to learn patterns in data.

And what Deep Fakes are is a very simple idea. You hand this machine learning algorithm two things; a video, let’s say it’s a video of somebody speaking, and then a couple of hundred, maybe a couple of thousand images of a person’s face that you would like to superimpose onto the video. And then the machine learning algorithm takes over. On every frame of the input video it finds automatically the face. It estimates the position of the face; is it looking to the left, to the right, up, down, is the mouth open, is the mouth closed, are the eyes open, are the eyes closed, are they winking, whatever the facial expression is.

It then goes into the sea of images of this new person that you have provided, either finds a face with a similar pose and facial expression or synthesises one automatically, and then replaces the face with that new face. It does that frame after frame after frame for the whole video. And in that way I can take a video of, for example, me talking and superimpose another person’s face over it.

There is a rich design space for interacting with enumerative algorithms, and we believe an equally rich space exists for interacting with neural networks. We have a lot of work left ahead of us to build powerful and trusthworthy interfaces for interpretability. But, if we succeed, interpretability promises to be a powerful tool in enabling meaningful human oversight and in building fair, safe, and aligned AI systems

In 2015, our early attempts to visualize how neural networks understand images led to psychedelic images. Soon after, we open sourced our code as De…

Is it just me, or is this new article exploring how feature visualization can combine together with other interpretability techniques to understand aspects of how networks make decisions a case of creating a solution and then working out how or why it works? Seems reactive or maybe I just don’t get it.

Google’s caution around images of gorillas illustrates a shortcoming of existing machine-learning technology. With enough data and computing power, software can be trained to categorize images or transcribe speech to a high level of accuracy. But it can’t easily go beyond the experience of that training. And even the very best algorithms lack the ability to use common sense, or abstract concepts, to refine their interpretation of the world as humans do.