Kathleen Morris provides some suggestions about what makes a good library website.

The trick making your library’s website or blog as engaging and useful as possible is to include these 5 essentials:

She also provides a useful collection of examples.

Classroom blogging can be a powerful and effective way to enhance the learning experience for your students. However, if you’re new to starting a blog, there are some important things to consider before jumping in.

Let’s recap the ten mistakes to avoid with your classroom blog:

Kathleen, I wonder if the idea of what constitutes blogging is different for different people in different points in time? I wonder if it is as simple as talking about ‘posts’ and ‘blogs’? Or maybe what I doing here with post kinds is even blogging at all? If you’re in North America, this wouldn’t be news to you but in Australia and many other countries worldwide, Facebook’s Messenger Kids has just been launched.

I’ve been exploring Messenger Kids over the last few days and have found some pros and cons.

This post shares what Messenger Kids is all about so you can decide whether it might be a good idea for your own children or something you’d recommend to the parents of your students.

I always enjoy the way in which you break things down in your posts, thank you. In particular, I was left thinking about your point about play and how students interact online.

One thing that instantly annoyed me about Messenger Kids is that there are so many distractions from the core features of messaging and video calls. There are filters, stickers, and mini games (like spinning to choose a llama head during a video chat… go figure… kids love it!).

My 6 year old is SO drawn to these features as are her friends. So far, this is their main interest during video calls. They don’t talk very much. They just play.

Initially, I kept prompting in the background, “ask them what they’ve been doing”, “stop playing with the effects and talk!”

Then I took a step back and thought, this is what they want to do. This is play. They’re only 6/7 and if they were playing together in the same room, they probably wouldn’t be sitting chatting about what they’ve been up to. They’d probably be playing in a way that’s sometimes hard for adults to understand.

So my way of thinking now is that it’s okay. Maybe the novelty won’t last. However, when my daughter is talking to her grandparents, for example, I’m insisting that she talks rather than simply playing with the effects. It’s about changing your interactions to suit who you are communicating with; a vital lesson for both online and offline encounters.

In an era of remote teaching and learning due to the global pandemic, teachers and students are relying on video more than ever before.

Video in education can mean a lot of things:

Video is an everyday part of most students’ lives and can be a crucial tool in a remote learning curriculum.

But what tools and equipment should you use to create videos, screencasts, or live conferences? Where can you find high-quality videos that others have made? And what’s the best way to share videos you’ve made with others?

This guide will help.

Kathleen Morris has continued sharing resources to support with the move to online learning. This time it is a thorough guide on the use of video. This includes forms of video, applications, techniques, editing software and means of sharing.

A couple of applications that I have found useful in the past are TouchCast and Adobe Spark Video.

This is a great resource Kathleen. Thank you for sharing. With so many parents being forced or deciding to keep their children home from school, Kathleen Morris shares her experiences of homeschooling. A useful post, especially alongside Austin Kleon’s reflections. It is interesting to consider this list and compare it to what does and does not happen in school. 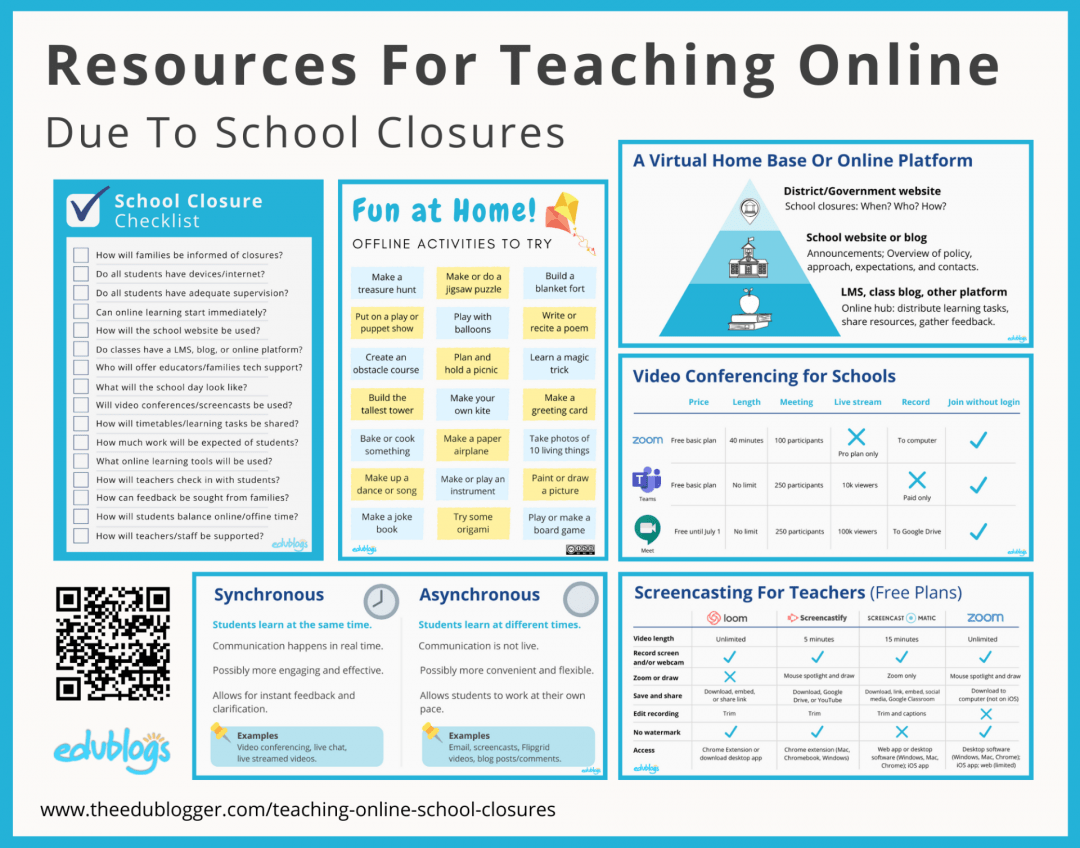 Our guide will give you insights into how educators around the world are approaching school closures.

Thousands of teachers worldwide are currently sharing snippets of their experiences via social media or their blogs. We’ve compiled, curated, and built on some common themes and ideas to create this extensive guide.

You’ll get ideas on:

This post also includes a range of useful graphics to help you that you’re free to use and share.

Kathleen Morris provides a number of topics and tools to consider if forced to move learning online. This includes how to structure online learning, what are some options for a learning hub, the different tools available to support learning experiences and some things to consider if moving online. The post provides a great summary of what is possible and often links out to other Edublogger posts on various applications. However, I think the post useful parts are the list of obstacles and school closure checklist at the end.

Although technology provides something of a solution to the problem at hand, I think we need to be mindful of rolling out such changes seemingly overnight. As Audrey Watters reminds, we must not forget the accessibility and privacy implications. I am concerned that once the miasma clears we will look at each other and wonder what informal agreements we have signed, especially with so many offering ’90 days free’ for those impacted by the coronavirus.

I remember thinking about this a few years ago, I also discussed some different applications that can be used to support visuals and methods for sharing on Twitter, I never properly unpacked the differences as you have done in this post Kathleen.

Up until May 2019 I was quite dedicated about posting twice a month. Having a goal kept me accountable. I’m so much more about “going with the flow” these days as things can change by the minute or hour now. So we’ll see how often I post throughout this year.

Thoughts with you and your family during these times. Life has a strange way of providing perspective at times.

Thank you for sharing Kathleen. Thoughts with you and your family during this time. Kathleen Morris provides a number of tips associated with email, such as using an email service provider and canned responses. Doug Belshaw provides a different take on email and efficiency, collecting together a number of resources and references on the matter. It is also good to remember that email is a flawed technology.

One has a never-ending list of blog post ideas but just can’t find the time to write them all. The other wants to write more blog posts but is stuck for ideas.

If you’re the latter, you’re in luck. This post offers you 7 ideas to help you find inspiration for your future blog posts.

These ideas apply to both student and teacher bloggers.

This is a good collection of ideas Kathleen. One thing that I do not see discussed a lot is post formats and the possibilities that this can provide in regards to collecting and curating ideas? Personally, I use post kinds, which is a different flavour, but achieves a similar outcome.

This post outlines a simple approach that will see you develop consistency with your blogging and publish one blog post a week. You only need 10 minutes a day to reach your blogging goals!

I love the idea of breaking blogging down into a deliberate and sustainable habit. Not sure it would work for my complex and sometimes chaotic workflows, but I could see it working for some. This post will help you evaluate whether Seesaw is something that’s worth using in your classroom. Or, if blogging with WordPress is a better option to replace or complement Seesaw.

Thank you Kathleen for breaking down the differences and similarities between Seesaw and Edublogs (and blogs). Reading your discussion of ‘dumping’ evidence verses crafting a presence, made me think of my own practice of collecting posts (such as this) versus crafting longer responses.

Some of the further thoughts I had about the differences were around:

In the end I think that the biggest question that people need to consider is what is trying to be achieved and which tool will help this. While it’s unlikely young people will never experience an issue online, I believe it is a good aim to both minimise potential harm and ensure students feel like they always have someone to talk to.

Digital citizenship education is an ongoing process, and the work of one teacher is not enough. Ideally, we need parents, students, educators, community members, and school leaders to unite.

Most of all, we need to create a positive culture where students feel empowered to use technology safely and purposefully.

Kathleen Morris outlines her four layered approach to teaching digital citizenship. This focuses on integrating the various skills within the curriculum, providing real world stories to reflect upon, building up student toolkits and developing lines of communication. Associated with this, she also provides ten tips for students.

So you’ve made it this far and started 2019 with a great start to blogging. How do you keep it going?

Here are 12 tips to offer you some inspiration. Different things work for different people and we’d love you to share your own tips in a comment!

Closing off the 28 day blogging challenge, Kathleen Morris provides a list of strategies for maintaining momentum. On the flip side, Aaron Hogan provides a list of blogging rules that you do not have to follow. These include the idea that blogs need to look a certain way or be perfect.

Teachers, what’s your favourite way to communicate with parents throughout the school year? Do you have any examples you could share?

I have experienced a combination of LMS (Sentral, Compass, Synergetic) and social media (Facebook pages). I have discussed the use of Slides for newsletters in the past. I also think that there is scope for storing ‘newsletters’ in Google Drive to embed elsewhere.

Personally, I think that it is a balance between where parents are and where you want them to be. I think a lot of people baulk at something like Edublogs because it is another space to log into, however I have significant concerns about sending people to places like Facebook and other such sites because of the issues with algorithms and advertising.

What annoys me most though about most forms of notifications is that they often send out a link to the information with just enough detail to get you to click, but not enough to be content.

Kathleen Morris unpacks ten strategies for improving your blog, including having an updated about page, organising your posts using tags and categories, use hyperlinks and use images to break-up your writing.