Pals!! Anyone know a good AFLW blog they can recommend for my niece? (@nichmelbourne @yiduiqie other footbally people?)

Fiona, not exactly sure what you are after or what constitutes a ‘blog’ these days, but I’d recommend reading @Kate_ohalloran writing on the matter https://www.abc.net.au/news/kate-ohalloran/10821058 she also has a podcast @KickLikeAGirlFM

If anything, the disproportionate response to the mere possibility of renaming AFL to AFLM is a reminder of the many cultural barriers that remain before genuine strides towards gender equity in sport can begin.

Update: have since realised that Bolt teamed up with another News Corp bully in Tim Blair who has used his "blog" to further demean and attack my family & I. This is not funny, but an attempt to incite further hate on an article about abuse. #womeninmedia https://t.co/k3HQLwjQyK https://t.co/gHez3jh3F9

Kate, what I don’t get about both responses is what they are trying to actually achieve? It certainly isn’t some sort of dialogue. I was also confused about poor Garry Lyon, I was pretty sure you were not the only one to make the same mistake and you apologised. I’m a little lost for words tbh

Freelance journalist and sportswriter Kate O’Halloran knows the risks of being a woman online and daring to comment on areas traditionally dominated by men. Kate was abused, harassed and left fearing for her safety after making an error in a tweet she posted while watching a game of AFL.

Kate O’Halloran reflections on her mistake on Twitter. She discusses how she was trolled, firstly on Twitter and then on Facebook. Associated with all this, O’Halloran discusses the toll that it took on her and her family.

I still haven’t read the comments on the post I made before I logged off. In fact, when I re-read over the abuse I received for the sake of this article, my smartwatch warned me that an “abnormal heart rate” had been detected.

She closes the piece encouraging people if they care for the welfare of those being targeted to contact them to provide support.

Patrick Wright discusses O’Halloran’s example to unpack the statistics associated with online abuse and bullying. He also provides a number of suggestions of what to do when placed in such a situation, including reporting, deflecting comments, using humour and blocking.

O’Halloran is among the many women journalists who receive vile online abuse. In fact, a global survey by the International Federation of Journalists found that almost two thirds of women journalists receive online abuse and harassment. To put this further into context; every 30 seconds a woman journalist is harassed online. This harassment takes the form of name-calling, sexist comments, serious accusations of physical harm such as death and rape threats, devaluing their work, threats against their partners and children, and posting of personal details online (doxing).

Clearly gender is an elephant in the room when it comes to social media.

Another announcement from me – alongside my new role at VU I'll be working on a postdoc called "Reconfiguring women's professional sport – on and off the pitch". It's a national grant involving UTS, Griffith and VU & I'm very excited! Read: https://t.co/MAiNd1Rcva #womeninsport

Congratulations Kate on the new roles

Fifty three thousand and thirty four. That is the number of spectators who flocked to watch the Adelaide Crows dominate Carlton at the AFLW grand final on Sunday, setting a new attendance record for a domestic women’s sport game in Australia.

When former male AFL players join the pile-on of their female counterparts, you can see there’s still a lot of work to do.

Kate O’Halloran reports on the furore that has arisen around the publication Tayla Harris’ photograph, where Channel 7 pulled the image after being inundated by trolls, only to reinstate it after pressure. O’Halloran explains that such trolling is neither new nor is it restricted to AFLW. Instead, it highlights an underlying misogynistic culture within sport:

There is enormous power and privilege associated with men’s sport, and it is time that power was used to support those who are much more marginalised, paid precariously and subject to abuse simply for making headway into a deeply patriarchal culture.

This reminds me of Phil Cleary’s article in 2004 discussing this subculture. What concerns me is that Harris raised concern that some of the men who made derogatory comments online had wives and daughters. I have concern that it is appropriate for anyone to say such things. It will be interesting to the see the legacy of this moment.

It’s 7:10pm on International Women’s Day, and footy takes centre stage at Canberra’s UNSW Oval. The Friday night clash between the Giants and Adelaide is broadcast around the nation on three major radio stations, while also screening on Fox Footy.

But this is not an AFL Women’s fixture — it’s a JLT men’s practice match. That’s right, on a day purpose-built for furthering gender equality, and in the middle of the AFLW season, the stage is instead set to showcase men.

It’s howlers like these that infuriate fans and players alike (including, notably, former Collingwood AFLW player Meg Hutchins) and make one doubt the AFL’s commitment to — and vision for — its national women’s competition.

Exciting news! I've been nominated for a Quill award for coverage of women in sport! Have been having v. tough time lately with my beautiful Grandma in palliative care and not having stable work in journalism, so it's really nice to get this recognition! https://t.co/IFi9xnLXpK

I have really enjoyed your weekly series Kate. It would seem that the challenges are always more complicated than is often appreciated in the media.

Fans of women’s sport, the broader LGBTIQ community and those interested in gender equity more broadly — these are the people I see drawn to AFLW matches, many of whom would have made the trip to Footscray for their first ever match of Australian rules football on Friday. 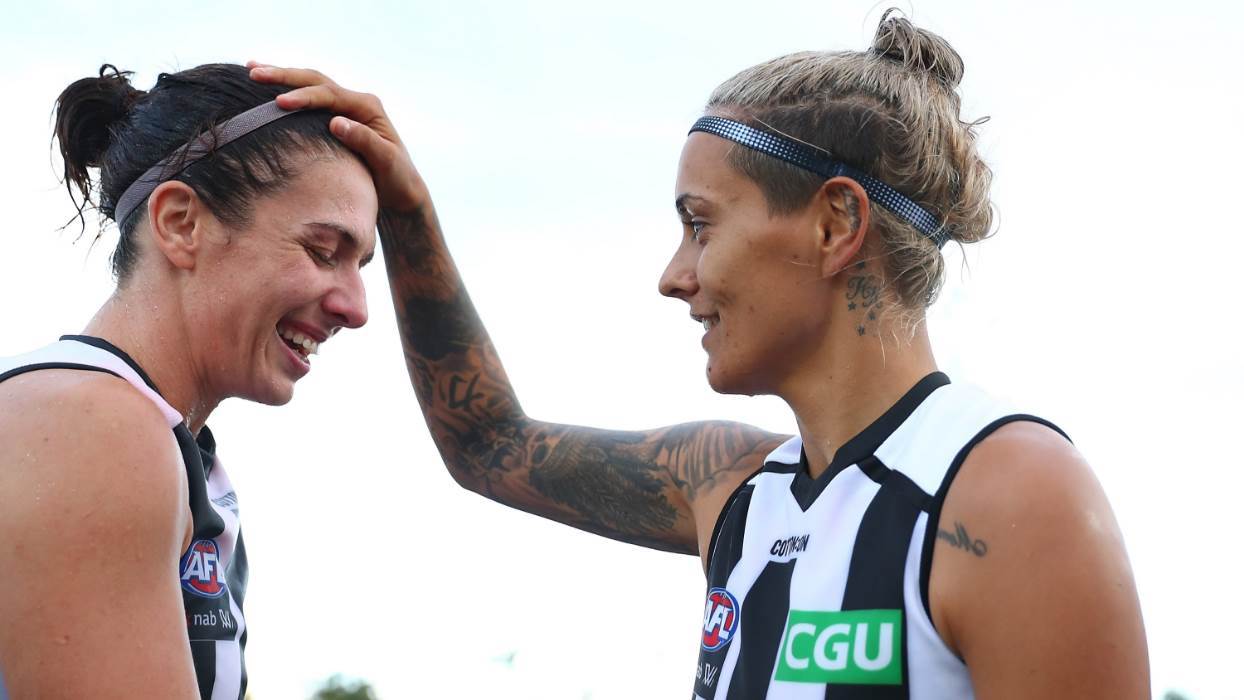 In 2017, AFLW rode in on a glorious wave of cultural change that felt unremitting and incapable of being reversed. Finally, women had the opportunity and national stage to play that felt like an acknowledgement of, and beginning of a correction to, over a century of exclusion and marginalisation. But now more than ever it needs champions like Hope to be brave enough to assert themselves in the face of the increasing backlash to the opportunities that wave provided.

Kate O’Halloran breaks down the incident which involved Mo Hope walking off the stage during a panel discussing women’s football. The problem, as O’Halloran explains, relates to control and power of bodies:

It should go without saying that men who participate in Australian rules football (or rugby league, or any other sport for that matter) also put their own bodies at such risk. Those choices, however, are not questioned in the same way women’s are, because men are seen as having autonomy over their bodies and their decisions, while women’s bodies – in the minds of dinosaurs like Malthouse at least – are still subject to men’s control.

For me, I have concern about the expectations placed on AFLW. Like many forms of change and innovation, people often want their cake and to eat it too. It would seem that there is an expectation of parity on the field when I doubt their is parity off the field.

I was watching Talking Footy recently and Brian Taylor spoke about the process that Collingwood are looking at to fix Darcy Moore’s hamstring issues. They are hoping to do biometric testing during the preseason to identify where the stress is coming from. Would an AFLW player who needs to take leave from their full time job receive the same resources dedicated to them?

Why, then, does a violent act between two men on a football field draw such ire, while ex-footballers who are convicted of violence against women rarely face such outcry, or worse, are welcomed back into the AFL fold with open arms?

Women must say no when the AFL refuses to play fair, as tennis players did in the 1970s

Kate O’Halloran reports on the proposed changes to AFLW. In addition to a second article accounting Susan Alberti’ response, O’Halloran compares with the response of women’s tennis in the 70’s and that we may need to go backwards in order to break new ground.

In Bob Murphy’s newly-released memoir, Leather Soul, he describes his impromptu speech to teammates at the Railway Hotel in Yarraville after that famous win. “This premiership, for some long-suffering Bulldogs people, means they can actually die happy,” he told them from a bar stool, pint in hand. Murphy remembers a quick rebuke from former captain Matthew Boyd, who told him the observation was “a bit fucking morbid”. Over coffee, Murphy and I agree that for many, it was true.

With the introduction of two new teams in 2018, the AFLW will also gain two more male coaches: Paul Hood at Geelong and Scott Gowans at North Melbourne. One can only hope that the AFL, and each club with an existing male AFLW coach, is also cognisant of providing equitable and sustainable opportunities for women to progress their careers in AFL leadership. Otherwise, the AFLW is at risk of being a women’s competition run by men, for men.

Past statements about rival teams are now coming back to bite certain Australian players.

Some men might think scoreboard is more important, but what I see [in AFLW] is belief, and people feeling a sense of belonging and community.