I guess it is weird but I just do not absorb lyrics unless they are absolutely crisp and clear? I struggle to understand them often even when I am trying. I have often gone “I love this cheerful happy song” and Chris is like “hmmm you should probably not look the words up” https://t.co/tXNfjjVVcs

I kind of agree Fiona. I often get into songs by feel and only dig into them at a later stage. I think this is why I get into music without words.
I have been reading Fiona Hardy’s How to Write the Soundtrack to Your Life with Ms 9 and am really intrigued by the space created. There is a part of me which keeps on questioning various actions and activities, wondering if they would really happen. Would kids write songs so quick? Would they really have access to a video camera … at lunchtime? However, I also wonder if the problem is me? Maybe, I am not the intended audience? Maybe such books are not about being true, but instead about dreaming in an alternative universe? 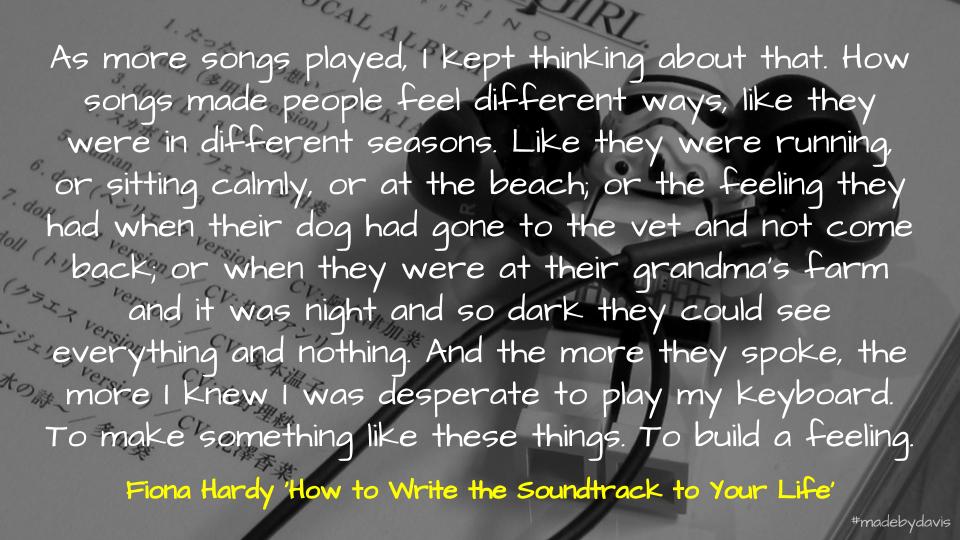 In Fiona Hardy’s novel How to Write the Soundtrack to Your Life, the protagonist, Murphy, reflects on the association between songs and feelings.

As more songs played, I kept thinking about that. How songs made people feel different ways, like they were in different seasons. Like they were running, or sitting calmly, or at the beach; or the feeling they had when their dog had gone to the vet and not come back; or when they were at their grandma’s farm and it was night and so dark they could see everything and nothing. And the more they spoke, the more I knew I was desperate to play my keyboard. To make something like these things. To build a feeling.

This had me thinking about the role of music in setting space. For example, the soundtrack to Sons of Anarchy draws on many familar tracks, but interprets them to fit a particular feel. Or David Lynch’s subversive choices, such as the use of Roy Orbison’s In Dreams in Blue Velvet.

To me, Lynch and Orbison both occupy a space in their respective art forms as singular voices. Each seem to traverse or explore more dream-like or subconscious terrain and each bring back a vision that is unique, that is, perhaps, candy colored.

Another way of looking at the creation of space, is the search for a space long lost. This is what Daniel Leviton unpacks in regards to the association between music and the memory of a particular time in life,

FRIENDOS!! My new book, How to Write the Soundtrack to Your Life, is out now! It’s about a shy kid who loves to play keyboard in secret—but is accused of stealing a song by her classmates when a tune she wrote is put online. GASP! Check it out at your local bookshop from today 📚 pic.twitter.com/uC7lAJdKkf

Finally got a copy Fiona and Ms. 9 told me that you know if you are going to be interested in a book in 7 seconds. I was kind of worried, but she said it was the next book on the list to read. Just gotta finish The Magic Wishing Chair first 🙂

Can someone please tell me if this is normal? I am in my house but there is no one else here and instead of two zoom meetings happening there are none??

Strange times. I got to talk on speaker without fear of being rude. Simple pleasures.

Looking at this ancient picture a friend just sent me, I cannot help but see those absolutely trashed year eleven lockers of ours and think: life really is not like American high school movies, is it pic.twitter.com/iICxGXlH8s

Can I ask a dumb question, who took this photo, knowing that smartphones did not yet exist in Year 11? I do not remember people walking around corridors taking photos.

Fiona Hardy’s funny and heartfelt new novel How to Write the Soundtrack to Your Life is a celebration of music, creativity, and listening to the world around us. Here, Fiona shares some of the music that has shaped her life.

Well that radio interview was a bunch of fun!! Not sure where @dontattempt got my embarrassing Oliver Sacks story from but my friends have very much enjoyed sending me text messages about it 😂

I am not sure I will ever think of Oliver Sacks the same way again.

FRIENDOS!! My new book, How to Write the Soundtrack to Your Life, is out now! It’s about a shy kid who loves to play keyboard in secret—but is accused of stealing a song by her classmates when a tune she wrote is put online. GASP! Check it out at your local bookshop from today 📚 pic.twitter.com/uC7lAJdKkf

Hey pals! Since I’ll be launching my next book in lockdown, I should probably get some kind of better audio setup for online meetings/events/radio things. Any recommendations for maybe headphone ones?

Fiona, have a look at this post from @aaronpk

Me, desperately clutching at positive things: I guess since we haven’t been able to do fun stuff for months, at least we’ve saved a couple of dollars, yeah?
My shower at one o’clock this morning: pic.twitter.com/Tb3AOJ7HWT

You wouldn’t read about such horrors. Glad you are safe.

I really haven’t posted much on here lately. There have been times when I’ve needed to listen and not talk, and times when I’ve just been speechless. And now we’re in lockdown again as of tonight and I’m heartbroken for all of us. 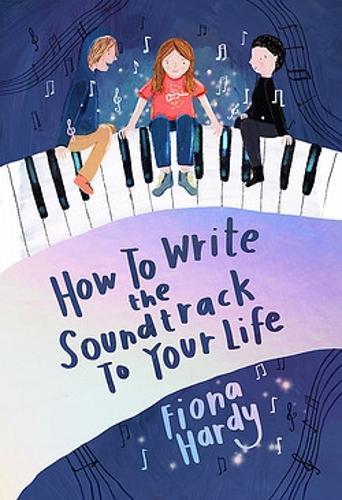 Aw yeah my second book is available for preorder! A sidequel to Movie, it’s about keyboardist Murphy Parker, who’s shy as heck and never plays for anyone—so when someone steals her tunes, she’s going to have to make some new pals to figure out who did it. https://t.co/DS2LF2maCa

We should never have to hear somebody say “I can’t breathe” under the weight of a police officer ever again. I can only hope desperately that change somehow comes from this. At the very frickin least, justice for those who suffered like #GeorgeFloyd and #DavidDungay. https://t.co/ZmxUXefKbC

Anybody on here consider themselves a bit conservative about what they let their kids watch and could help me with something for my middle grade book? Just watching music videos for the songs I’m discussing and checking they’re okay!

Even if I did play Body Movin’ for my kid brother when he was young https://www.youtube.com/watch?v=uvRBUw_Ls2o As a parent, I am agreeing with @JulieAnneGrasso. Unless there is something about the particular song that is an imperative, I would say no 🙁

Pals, I’m trying to write up some song lists for my next book, and I’m looking for your favourite (PG-rated) country songs! Get them in my ears!!!

I will let you judge the rating. Alcohol is a pretty common trope.

Pals!! Anyone know a good AFLW blog they can recommend for my niece? (@nichmelbourne @yiduiqie other footbally people?)

Fiona, not exactly sure what you are after or what constitutes a ‘blog’ these days, but I’d recommend reading @Kate_ohalloran writing on the matter https://www.abc.net.au/news/kate-ohalloran/10821058 she also has a podcast @KickLikeAGirlFM

It’s me, I’ve been awarded a research grant! I get to travel to Christmas Island and work on a middle fiction book about this beautiful and historically (and currently) turbulent tropical paradise! Thank you so much, @Writers_Vic ❤️❤️❤️

I have this same pile! I think it’s great. I had to write a lot before I got a clear idea of how to speak and learn to actually get around to editing. And, y’know, I’m still learning too. https://t.co/ygSK5Sl7wK

This is such an important message Fiona. It reminds me of Austin Kleon’s message from Steal Like an Artist:

What a good artist understands is that nothing comes from nowhere. All creative work builds on what came before. Nothing is completely original.

We however forget about stealing from our past selves.

This is what I like about Song Exploder, where artists break down the birth of an idea.

Folks! I’m running some lil movie-planning activities at @ReadingsBooks Doncaster tomorrow from 1-3pm, so haul your kid (or self) along if they’re keen! pic.twitter.com/dK6ZCifnvi