Too often, family involvement in schools is limited to baking for cake stalls and participating in fund-raising, Harvard Lecturer Karen Mapp says that it is important to move beyond the bake sale to more interaction around learning and developmental goals, and to provide tools for parents to support these goals.

Cameron Paterson discusses going beyond the information evenings, bake sales and parent involvement in his reflection on family engagement.

Family engagement in education is about parents and carers, schools, and communities working together to ensure that everyone plays a positive role in a child’s learning. Teachers need to find effective ways to honor the wealth of knowledge that families possess. A touchstone question for teachers to ask parents is, “What is something you would like me to know about your child?”

Paterson also shares links to a few resources, including Partners Education in A Dual Capacity-Building Framework for Family–School Partnerships and Learning Potentials website.

This is an interesting topic to consider in regards to COVID and the move to online learning. As Robert Schuetz touched on a few years ago:

Our infrastructure is in place, now it’s a matter of creating the expectations and dedicating the time necessary for teachers and parents to collaboratively advance student learning for all.

While Greg Miller describes this challenge as a battle for the ‘new normal’:

One of the ongoing challenges of designing a ‘new normal’ for preschool to post school has been to clarify how we work in partnership with parents to nurture faith filled curious children to become creative contributors and innovative problem solvers for a changing world.

I also wonder how this all plays out in regards to something like the Modern Learning Canvas? Clearly, it has a place in regards to ‘culture’ and ‘policy’. However, it makes me wonder about the consequences for the role of the educator and the pedagogical beliefs that may align with all of this.

What I propose is that instead of thinking in terms of Contact Hours we should move to the concept of presence -the extent to which a member of teaching staff is present and in what mode. This could come in many forms:

We are highly attuned to the levels of presence and attention (we are social beings) which is why a move to online shouldn’t involve cutting staff time or staff-student ratios.

David, I have enjoyed your reflections on the pedagogical move online. I really like your point about the pivot breaking the normalisation spell.

Classic lecture and the seminar practices are still basically sacred and carry massive cultural weight in terms of representing ‘university’. When we move to the digital though, all the questions we should be asking about face-to-face suddenly appear, as the change of location breaks the normalisation spell and greater scrutiny is applied.

It makes me wonder what impact coalescent spaces have on the physical and whether such spaces are really the same again.

Student insights from my study indicated that students’ relationship with their teachers is vitally important. This is consistent with previous research such as the study by psychologist and Director of the Center for Reality Therapy, Bob Wubbolding, who found that, “the higher the quality of student-teacher relationship, the higher the level of students’ interest in learning”. A student’s perception of that relationship is fundamental because, as this study found, students view their teacher as either policing or supporting their learning.

Insights from the students in my study also suggested that pedagogy was a key issue in (dis)engaging students. So, teachers who practice pedagogies that I call Connective, Participatory, and Differentiated that are founded on connections with students will have fewer disengaged students.

Before I respond to someone on @Twitter, I check their stream to understand their tone, sentiment and engagement motivation.

If I see any indication of trolling, negativity, overselling, misinformation or inappropriate content, I will not engage.

Vala Afshar provides some useful advice in regards to engaging on Twitter. This is useful alongside Sherri Spelic’s recent tips

Since the inception of St Luke’s in February 2017, one of the ongoing challenges of designing a ‘new normal’ for preschool to post school has been to clarify how we work in partnership with parents to nurture faith filled curious children to become creative contributors and innovative problem …

Always left inspired by the open sharing of your schools journey Greg. I remember parent engagement was my ‘moonshot’ that I took away from my Google experience:

How Might We ENGAGE PARENTS in a CULTURAL SHIFT to make RELATIONSHIPS and CONNECTIONS the focus of learning?

Although I may not have achieved the goals that I was aspiring towards, it is something which I feel grounds a lot of my work.

When students are involved in a competition, the thing they are focused on is the competition. Their mental energies are dedicated to finding the quickest, easiest and most effortless way of winning the competition. Thinking hard or learning plays second fiddle. The mind has a remarkable capacity to shirk the hard labour of learning, don’t give it another opportunity to do so.

Adam Boxer questions the benefits of competition and urgency on learning. This reminds me of a post from Natasha Singer on Kahoot!:

Kahoot seems like a bit of a throwback to a more old-fashioned pedagogical approach: behaviorism. This is the idea of educators shaping student behavior by handing out gold stars, stickers, points and the like.

To me it comes back to fun or hard fun. The most useful activity I did with quizzes in class was to get my students to create their own and upload them for their peers.

Wow! Good job teaching isn’t ‘unforgivingly complex’ & we can control for every possible variable that might influence attention & engagement! Another guilt-inducing soundbite coming from a distance away from the classroom. https://t.co/mOZo9JV0VC

It takes a village to teach a child.

Sometimes it pays off to think small. Think next door, down the hall, at the next meeting. Act large in small spaces. Notice who’s speaking and who isn’t. Practice not knowing and being curious. Be kind. Welcome warmly and mean it.

This microcast is my response to the pop-up MOOC, Engagement in a Time of Polarization, currently running. I have been following proceedings, but have struggled to contribute. After trying to write a more comprehensive reflection, but not knowing where to start, I decided to ‘think small’ and just share a short microcast. For so long I thought ‘engagement’ involved measuring the number of tweets etc, but I have come to respect lurking more and more as a legitimate (in)action. 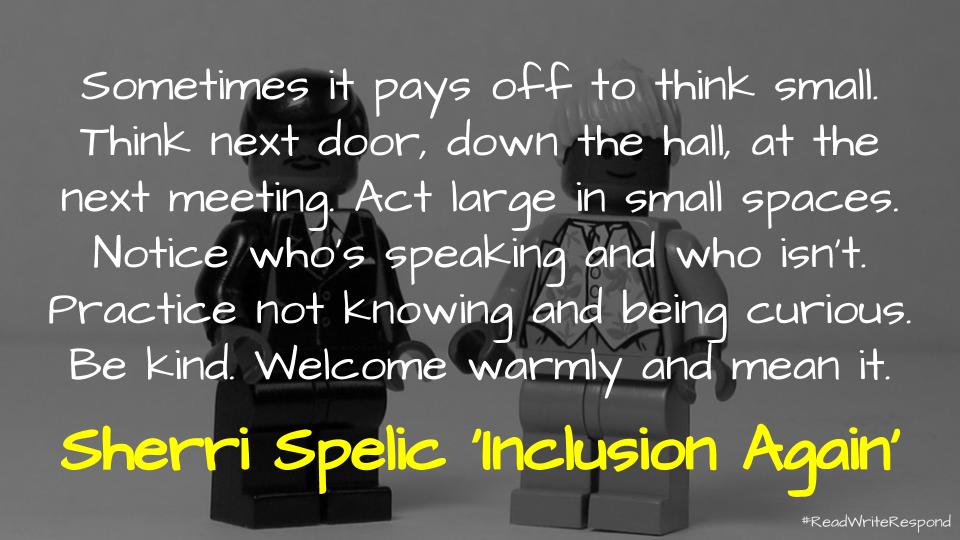 My broad argument is that no, students are not disengaged because schools are stuck in the past, but because schools are caught in the present strong current of policies that constantly re-shape and re-design schools – and life more broadly – to civically and politically disengage youth. To wage a war on them.

This is the text of a talk that Benjamin Doxtdator gave at #BrewEdWake on Saturday Jan 20, 2018 on the educational policies designed to disengage youth. This ‘war’ is in response to what students might offer:

Peterson is an example of what I have in mind when I talk about the ‘war on youth’, a phrase which comes from Henry Giroux. In the neoconservative attack, youth are triply marginalised because it is claimed:

These attacks are always racist and sexist, directed against people who are poor and the most marginalised and vulnerable.

Doxtdator also wonders where the hope is:

It’s difficult to see radical possibilities of hope for youth in either of the main reform movements: the neoconservatives see youth as dangerous, but the neoliberal ‘future proof’ movement also tells a story about the value of youth that too often “forecloses hope” (Henry Giroux).

This is the story that is not told when we talk about students being ‘entrepreneurs’ and creating the future.