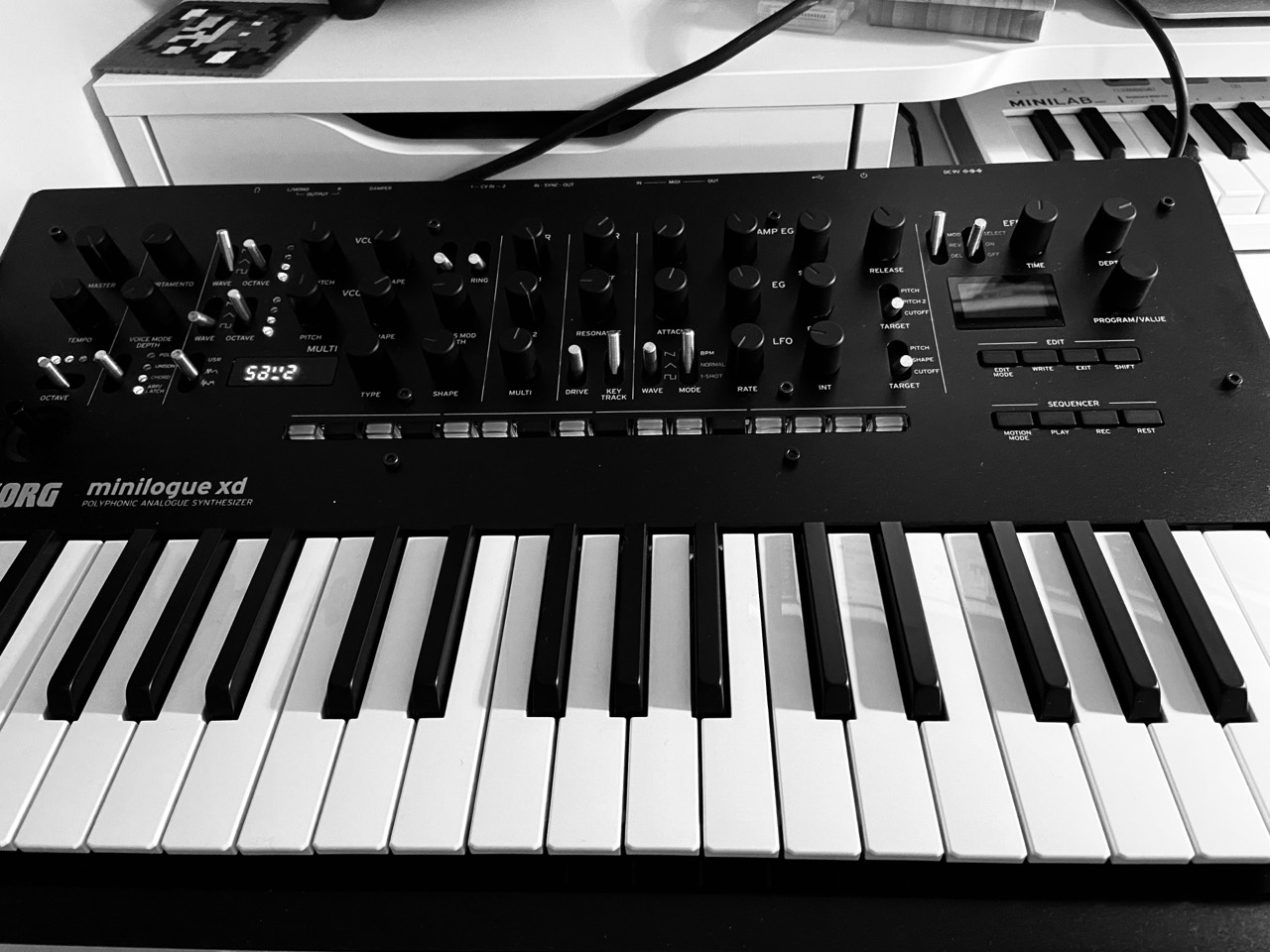 That looks nice Henrik. I bought a Korg Volca Modular as a present for me from me at Christmas.

I built a modular synthesizer without any electronics experience, and I want to empower others to do the same, to build their own weird sound machines. I want people to know that this is not beyond the realm of possibility- you can do it, and for cheap!
A few years ago I started trying to build an a…

Thank you Chris for this write-up. It would seem that Forrest Mims’ book Getting Started in Electronics might be the right place to start. For now I have been looking at Korg’s Volca Micro-Module as a starting point to making sense of modular synthesisers.
Another online drum machine with multiple parts via Clive Thompson.

Coming soon: a guide to getting started building your own synthesizers! I have some info on my website, but it mostly relates to my particular modular synthesizer and doesn’t really address how to actually get started, what tools you need, where to find circuits, etc. I’d like to change that and…

This sounds fantastic Chris. Definitely interested. Just need to get me a workshop too

The most recent album i,i came out in August 2019, and in this episode, Justin breaks down a song from it called “Holyfields,.” He’s joined by producers Chris Messina and Brad Cook. We spoke to him in July, from his studio in Eau Claire, Wisconsin, where the song started. They finished it at Sonic Ranch studio in Tornillo, Texas, on the border between the US and Mexico.

In this episode, Justin Vernon reflects on his use of electronic instruments and the inspirations to his music. This includes a short discussion of the use of The Messina, a synthesiser developed by Chris Messina.

Chris Messina figured out the perfect combo of software and hardware that lets Justin Vernon sound the way he does. “But here’s the thing,” Messina says. “It’s not a thing.”

Emilia Petrarca discusses the innovation and opportunities provided through the use of The Messina, a mixture of software and hardware, created by Chris Messina. This was inspired by the vocoder and the Prismizer. This sound/technique has not only been used by Bon Iver, but also Banks.

A few days after the Pioneer Works show, Chris Messina was on the phone; he was willing to offer a simplified version of what goes on with his machine. “Onstage, Justin is singing a song, and he’s playing a keyboard that can create harmonies simultaneously,” he said. “Normally, you record something first and then add harmonies later. But Justin wanted to not only harmonize in real time, but also be able to do it with another person and another instrument. The result is one thing sounding like a lot of things. It creates this huge, choral sound.”

When I asked Messina to describe what The Messina looks like, he responded, “Here’s the thing — it’s not a thing. There’s a laptop running software, and then that software is run through a physical piece of hardware, that is then doing another thing,” he explained. “It’s many things working together and none of them are ours, but the product is. Basically, we used things the way they’re not normally intended, and we put them together. That’s how we get the sound.”

For this #1564challenge I limited myself to stuff out of the Toybox, but I did allow myself a B section that uses 6541. I tried to focus on melody, which is something I often forget about. It’s not something I’d throw on when guests are over, but still, #EveryoneCanCreate pic.twitter.com/wNuBZNBIqk

On the upside, the rise of AI tools could spur entirely new genres. Fresh music technologies often do. The electric guitar gave us rock, the synth helped create new wave, electronic drum machines and samplers catalyzed the growth of hip-hop. Auto-Tune was a dirty little secret of the record industry, a way to clean up bad singing performances, until artists like Cher and T-Pain used it to craft entirely new, wild vocal styles. The next great trend in music could be sparked by an artist who takes the AI capabilities and runs with them. “Someone can make their own and really develop an identity of, I’m the person who knows how to use this,” says Magenta project engineer Adam Roberts. “A violin­—this was technology that when you give it to Mozart, he goes, ‘Look what I can do with this piece of technology!’” exclaims Cohen, the Orchard co-founder. “If Mozart was a teenager in 2019, what would he do with AI?”

Clive Thompson looks at the marriage of music and machine learning to create tracks on demand. He discusses some of the possibilities, such as generating hours of ambient music on the fly or creating quick and easy soundtracks. It is interesting to think about this alongside software music and the innovation driven by broken machines.

Each Sunday, Pitchfork takes an in-depth look at a significant album from the past, and any record not in our archives is eligible. Today, we revisit Daft Punk’s debut, the duo’s greatest illusion yet.

We’ve all gotten enough distance from the last Daft Punk album to admit that it sucked, right

I love Daft Punk and have always been somewhat mesmerised by their music. For me the genius is captured in the documentary Daft Punk Unchained. I think that this is eptimosed with Random Access Memories. What I love the most is the way the tracks and the album as a whole ebbs and flows. Whether it be the changes in intensity or the blend of acoustic and electronic. As a sidenote, Darkside also created a remix of the album.

Certain DJs use certain techniques to mix. So it’s not always pod up pod down. Some DJs use the EQ to filter out the frequencies and thus the audio. Some DJs use the crossfader because it’s a very literal way of going between tracks. Some kind of feed and tease the line levels. Some DJs work in a way of, I suppose, amplitude, where they mix by building sounds together, but not so much attention to subtracting and deleting.

Will Lynch talks with Jeff Mills about the art of DJing. The more I read about different artists, the more I realise there is a certain misnomer around what DJing actually means. I remember growing up with the perception that it was just about scratching records, but as Jeff Mills explains, it can be about making those records too:

Do you shop for music much?

Not as much as I used to. I would first try to make it. Or I would alter someone else’s track, just for me to use, not to sell it. But if say, I like someone’s track, but just the bassline and the drums, I’ll make a special version of that just for me.

This reminds me of Mark Ronson’s album Versions, which he produced in order to use in DJ sets.

Another word that Mills uses is ‘programmer’. This is in reference to the connection between the DJ and the audience:

To be a programmer, you have to put yourself in the audience’s position. Not only that, but you have to really know your audience, and you have to anticipate what they want to have, and what they need to have, at what time. When I think of these type of things I think of DJs like Larry Levan. He knew his audience, because he was part of his audience. He knew exactly what to do at what time for those people. There was no division between what was happening in the DJ booth and in the audience.

Jeff Mills also provides an insight into the curative mind of the DJ. He explains how he only listens to the last quarter of songs, because that is usually where all the parts have been mixed together:

This performance is an interesting mixture of electronic versus organic.

From Parliament to Devo to Dr. Dre, the synth sounds of the Minimoog are as famous as the musicians that have used the analog wonder to such great effect. Your faithful captain, William Kurk, is back in the studio today to explore the #SynthSoundsOf…the Minimoog!

William Kurk unpacks the sounds of the Minimoog associated with a range of artists. More than just modelling these sounds, Kurk walks through the construction of these sounds. This is what is missing in videos such as Moog’s Sound Lab series.

Moby discusses his collection of drum machines. He touches on the different characteristics associated with each. I came upon this via Reverb’s History of the Drum Machine

What I like about drum machines is that they are awkward

Kimbra gained international fame when “Somebody That I Used To Know,” her duet with Gotye, hit the airwaves back in 2011. But prior to/since that single, Kimbra has crafted her solo career as meticulously and beautifully as her tracks, using a deft hand for live sampling, looping, and synthesis to build fascinating soundscapes.

Kimbra demonstrates the way in which she uses sampling within her music. In particular, she uses the Kaoss Pad 3 to sample and add effects.

Leon Theremin. Sly & The Family Stone. Prince. Drum machines have influenced our music and the way we perceive rhythm since the Rhythmicon popped onto the scene.

William Kurk takes a walk through the development of the drum machine to the use of applications, such as Ableton and Fruity Loops, today. Along with the discussion of the fault that produced the 808, this video provides a useful overview of the way technology has evolved over time. It is also interesting to think of this alongside Brian Eno’s discussion of technology and music.

Here’s a podcast on the history of electronic music, suitably called A History Of Electronic Music.

I remember first listening to this podcast from Paul Sheeky years ago. In a series of episodes he charts some of the technology and movements. I returned to it recently spurred on by the work of Chris Beckstrom and the Melbourne Electronic Sound Studio (not that I have been). Along with the compilation OHM: Early Gurus of Electronic Music and the documentary Synth Britannia, this podcast is a great resource for appreciating the history associated with electronic music.