Text and audio from my eulogy for Dai at Oundle School on 29th September 2019.

Thank you Doug for sharing the eulogy. Sadly, I was never going to make it to Oundle from Australia, so it was nice to hear your memories. 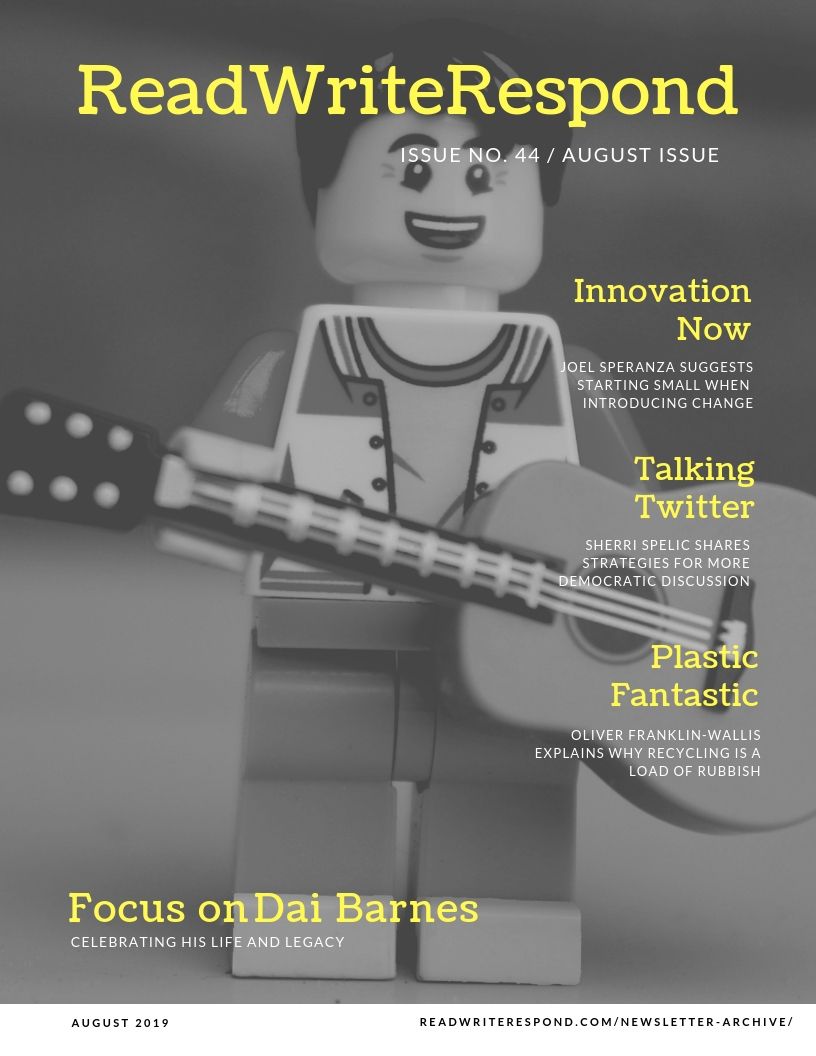 Welcome to August’s edition of Read Write Respond, a newsletter of ideas and information associated with all things in and out of education, mined and curated for me and shared with you.

On the family front, we have been making the most of the nice weather to get outdoors quite a bit. This included going on a few bike rides, as well as continuing our dive into geology by looking for gold in the Brisbane Ranges. We also attended the launch of Fiona Hardy’s novel How to Make a Movie in 12 Days, which was a great event.

At work, there was a review looking at some of the processes moving forward. This led to further work around managing timetables and refining reports. In addition to this, I supported a couple of schools with setting up for Semester Two. I also attended Swinburne University for a network meeting focusing on history and the whole learner.

Personally, my focus this year has been flanarie. It has been interesting. I think I have struggled with the seemingly structurelessness of the endeavour. I have found myself starting various books, then jumping to something new before finishing. This month, I started Imagined Communities, but then found myself diving into John Warner’s Why They Can’t Write. I have also started a number of posts, but never got around to completing them. Maybe this is ok? Maybe this is normal? Maybe my expectations are the problem? I think with so much structure in my life, it sometimes feels strange to let this go in any way. Don’t know.

In regards to watching, I finished Series 3 of The Handmaid’s Tale and took my children to Toy Story 4.

In regards to my writing, I posted a reflection on Dai Barnes:

How to Innovate: Ask Forgiveness, Not Permission

No, minister! Keep NAPLAN results away from student job applications

Stephen Wolfram recounts the entire history of mathematics in 90 minutes

Stephen Wolfram presents ramble through time and provides reminder of the way in which the present is built on the discoveries of the past.

From ball pits to water slides: the designer who changed children’s playgrounds for ever

Nicholas Hune-Brown explores the legacy of Eric McMillan and his revolution of playgrounds in the 1970’s.

Sherri Spelic share some tips and questions to consider when dealing with the toxic side of Twitter.

How far will digital video go?

Bryan Alexander discusses the possible future of video as a medium.

Artificial intelligence in Schools: An Ethical Storm is Brewing

Erica Southgate discusses a new report and project to support the analysis of artificial intelligence in education.

A Framework for Moderation

Dave Cormier provides a framework for learning on the internet.

‘Plastic recycling is a myth’: what really happens to your rubbish?

The Hopefulness and Hopelessness of 1619

The History of Cities Is About How We Get to Work

Building on the idea of Marchetti’s Constant, Jonathan English discusses the role of transport in the development of the city.

The Anthropocene Is a Joke

Peter Brannen looks at our current impact on the world and where it sits with the history of the earth.

How Hillsong and other Pentecostal megachurches are redefining religion in Australia

Stephen Stockwell and Ruby Jones discusses the rise of Pentecostal churches, such as Hillsong and Planetshakers.

On the night of Thursday 1st / Friday 2nd August 2019, Dai Barnes suddenly passed away in his sleep. Dai was one half of the TIDE podcast. He was also a champion of the people, something celebrated in the final episode of the podcast. Personally speaking, he was one of my first subscribers. Amy Burvall co ordinated a number of curations on Wakelet and Flipgrid collecting together disparate memories. There were also some longer reflections from Amy, Laura Hilliger Doug Belshaw, Tim Klapdor and Eylan Ezekiel. I will never forget him talking about a failed job interview where he found himself standing on the table like Jesus. Must admit, it has definitely left me feeling more mortal.

So that is August for me, how about you? As always, happy to hear.

This episode to celebrate the life of Dai Barnes is co-hosted by Doug Belshaw and Eylan Ezekiel, featuring contributions from friends and listeners to the TIDE podcast.

I felt something similar when hearing of Dai’s passing. I never met Bowie and never met Dai. With his passing, I was left reflecting upon the impact TIDE has had on my life.

I have listened to every episode, often sped up, but listened none-the-less. Although there were many of Dai’s arguments that challenged me and others that I disagreed with, his manner was always positive. I was always grateful for his openness and honesty. This is what I will miss the most and feel had the biggest impact on me as a learner.

My favourite memory is when he shared his failed job interview where he found himself standing on-top of a table. Priceless!

Thank you Doug and Eylan for compiling this celebration of Dai’s life.

Dai was no saint, and he’d hate it if I wrote this post in a way that denied his faults – as it would be bullshit. But I thought he was special. Someone who I’d have in my life for a long time and who’d bring more colour and depth of feeling (more of that selfishness!). In many friendships, this is a balanced thing – where both parties ‘invest’ in a relationship… and love is often experienced as a transactional thing.

“All flair and no substance” – that’s what he always said, lamentingly but with a slight twinkle in the eye, about himself.    When I got the news that David Sutherland Barnes, known the…

Thank you Amy for sharing your memories of Dai. Although you may not be a poet, I really loved your poem.
Thanks Doug for sharing this last episode. A classic ramble to end on.

THANK YOU to everyone who has written and recorded messages after the untimely passing of @daibarnes earlier this month.

We're planning a memorial episode of TIDE and would love your audio contributions: https://t.co/8Hy507KK1x

The TIDE Podcast is collecting contributions from listeners for a memorial episode celebrating the life of Dai Barnes.

Finally got to the beach to film my #barefootfordai video. He loved the sea. I share the poem I penned last week, too. https://t.co/ZqryQ3gy0O #RIPDai @daibarnes

Your walk, your thoughts

This. #poetry in particular but also making #art has helped me through every trauma from breakups to cancer to deaths of loved ones #creativityascatharsis https://t.co/jEsmYrjz5X

Things @daibarnes would say: (about his name): "It's Welsh, not an instruction"; (about shoes): "Devil's Work!"; (about cheese): "That is proper heaven"; (about changing his name): "I've always considered myself a Liv"; (about a lot of things) "that's, bonkers, man!" #RIPDai 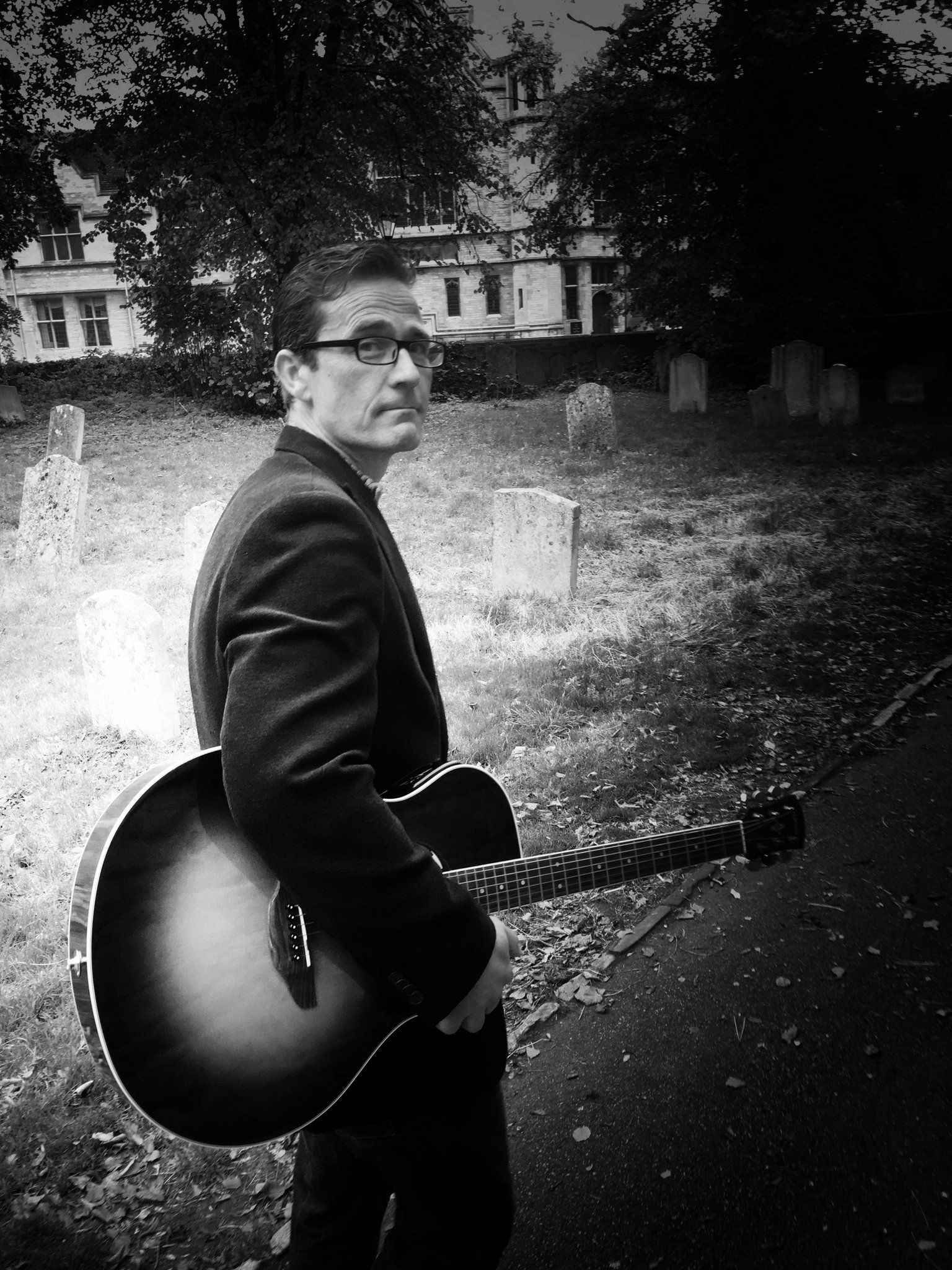 I have advice for people who are grieving or will grieve, as we all will for some reason in life: Allow it. Grief is every human emotion tangled up and out of order. There is no grieving well or not grieving well. Whatever emotions you experience are valid. Be kind to yourself, no matter what kind of crazy shit the emotional depths geyser into your conscious thought. Men don’t really call one another up and just ‘have a chat’, which is one of the reasons why I found recording the TIDE podcast with Dai so amazing. We recorded TIDE for just over four years, from 2015 until this June. It was just like having a chat with a mate while drinking whisky, that just happened to also be a podcast.

Thank you Doug for sharing your thoughts and reflections. I feel that Dai’s passing will leave a hole in many lives.

I like your point about pragmatism. That is definitely something I have taken away from both of you over the years. Easy in words, but always a challenge in action.

This will be my lasting memory of Dai Barnes. His recount of a failed job interview where he found himself standing on a table. Classic! 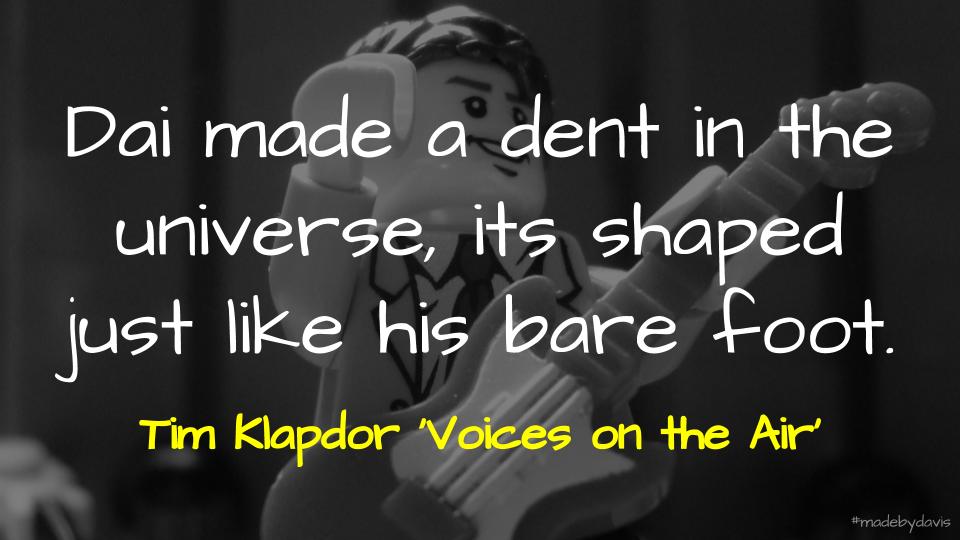 I want to thank Dai and Doug for sharing their lives through the podcast and their writings. I’ve felt privileged to get to know them through their work and what they shared. It’s been a privilege to have met Dai through this medium because there’s buckleys I would have run into him at the pub here in Wagga Wagga. It’s a reminder of the power of technology to connect us, to find the others and its ability to share and be intimate even with those you haven’t met.

Great reflection Tim. I like your point about privilege to be given insight into Doug and Dai’s lives through the TIDE Podcast.
Doug Belshaw and Dai Barnes discuss the development of social credit in China. Barnes shares how he got his students to think about this by creating their own social credit for the school space that steps away from teachers dealing with discipline and detentions. This reminds me of Google’s thought experiment associated with the human ledger.

Dai, I was interested in your discussion of James Bridle’s book. I agree Dai with your concern about such a dystopian portrayal. That was something that I tried to get across in my post on becoming informed. Is the answer that it takes a range of voices to get to this stage?

With this in mind I am intrigued by the video you mention from Vox featuring Tristan Harris:

I liked his suggestions, but for me it is like going to McDonald’s to buy a salad. The issue is not the salad, but McDonald’s and their push for non-human consumption. I wonder about a sustainable smartphone, one that is built ethically from the outset, not one that puts the blame back on the user. As Audrey Watters argues:

I don’t want to suggest that this is something the consumer alone is responsible for – blaming consumers, for example, for looking at their phone when it vibrates or beeps or for downloading Candy Crush and trying to get all their friends to play along. The whole modus operandi of the tech industry has been to create apps that are as engaging and compelling and viral as Candy Crush. The industry views its users as highly manipulable, their behaviors as something that can be easily shaped and nudged and controlled. Maybe it’s time to rethink and regulate and restrict how that happens?

Discussing the work of Harris the other such apologists, Watters asks why we should trust them:

Why should we trust these revelations (or revelators) to guide us moving forward? Why not trust those of us who knew it was bullshit all along and who can tell you the whole history of a bad idea?

I wonder then why we should trust Harris over Bridle and wonder whether in the end they both have a particular place at the table?