In order to comment, you need to enter two things: first, the comment itself, in the big comment field (I could probably have made that smaller, but I like long comments; none of this microcontent stuff for me).

And second, you need to enter the URL for comment submission on your own website. This is where your comment will actually be posted. This needs to be the exact URL (you can’t redirect it with a .htaccess, so I learned) and it needs to be able to accept a POST request.

Stephen, I kind of follow your explanation of ‘rcomments’, but the technical specifications are a bit beyond me. I just wonder how this differs from micropub clients?

There have been a couple instances where a blog comment on social media added enough value to the conversation or idea shared in my post that it inspired me to quote that comment myself, in the blog comments. However, it wouldn’t be sustainable for me to try to do that all the time. I don’t really have a solution, I think it’s just a matter of accepting that people will choose to comment on social media sites, and blogs are not as social (anymore).

I think that comments are really interesting, especially when pieces are POSSE’d across different platforms. Just to add context, Twitter replies are brought back into my site, whereas I need to manually add in any responses made on your site.  That was one of the reasons I chose to also post my short reply (linked to a longer reply) on Twitter.

On a side note, as I collect my comments, it was funny to notice that I have written three comments on your blog in regards to commuting.

In current WordPress, the only way for a comment to remain private is for it to stay in an “unapproved” status. It would be nice if comments could flow more easily between unapproved, private, and public.

Jeremy, I really like the idea of private comments. I guess this is a part of the wider discussion around private posts.

Twitter conversations are fun, but the richness isn’t there like it is in a longer format blog post and follow up conversation in the comments. Facebook seems to invite compliments like, ‘thanks for sharing’ or ‘I really enjoyed this’, but seldom anything deeper as an add-on to a shared post. LinkedIn seems to have the better conversations coming from blog posts, but they get lost in the stream as opposed to being curated with the blog post.

Thank you for the shout-out David. Read Write Curate was my first attempt at owning my own presence online using Known. However, I have since moved to Read Write Collect and WordPress.

One of the things that I have found useful is recording comments on my own site. For sites that use Webmentions, comments are automagically notified, however for others – like your own – I copy and paste the content. These reply posts add another dot to join together, to link to and build upon. 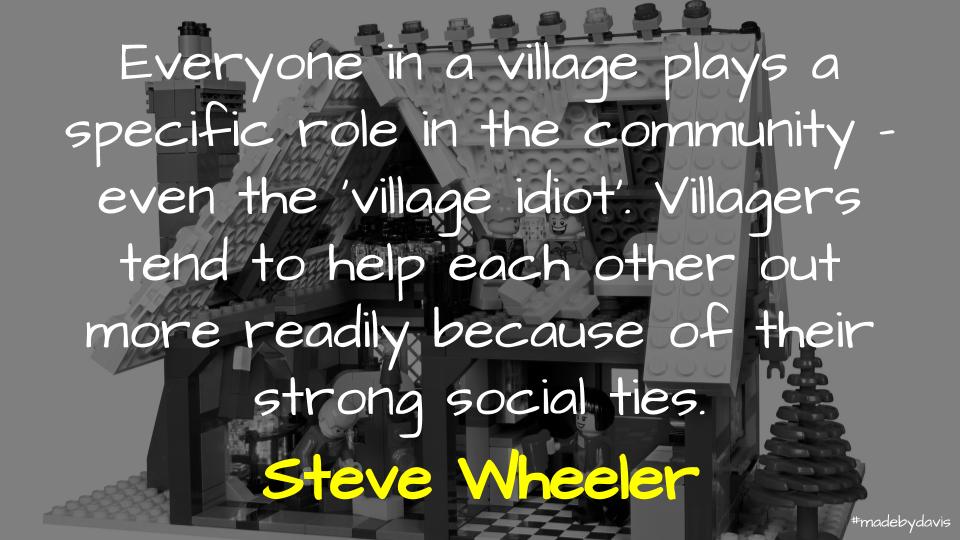 What if we posted comments to other spaces from our own sites utilising the power of webmentions? Both keeping a record of our conversations, as well as owning our opinions.

I don’t care about the imagined “good old days” of the web, and I’m not a pollyanna about the wild, open web being some panacea for all the harms that technology and the internet can enable. But I do think coercive methods of controlling people are a danger, and some of the most insidious techniques are when a platform subtly erases empowering opportunities for its users. So let’s look at all the apps that live under our thumbs, and interrogate the choices they’re making, and then imagine what they would look like if we demanded that our tools don’t tie our hands.

Anil, I agree with you that the web is becoming hostile to links. I often make an effort to include links in my online responses, it is the way I think, however they are usually either striped out or force my comments to be flagged by plugins like Akismet.

and @KateMfD's comment on my post showing me, once again, why blogging works for me. I try. Someone comments. I learn from their comments. Context and learning through shared experience. That's pretty human right? https://t.co/jmAZGWeJqu

Right 👏
An alternative platform to Disqus, with the addition of Markdown. I wonder where it sits with webmentions and microformats? 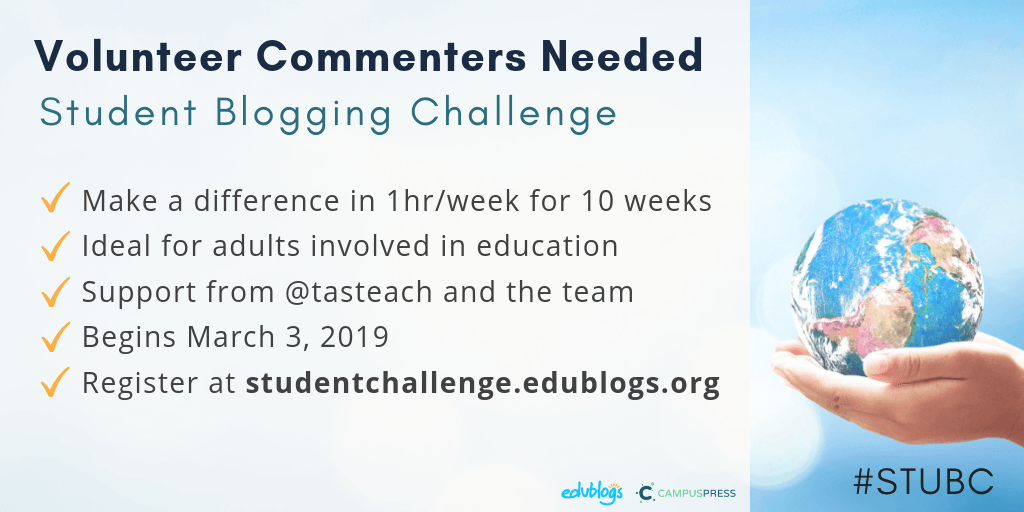 Right now, we’re looking for a team of adult volunteer commenters. Can you help?

I would love to help, but can not guarantee the time. I wonder if there is a means of finding a random post, such as the ‘?s=random’ function with WordPress?

One of the questions that I often field during my workshop on blogging is, “how do you keep track of what students are writing?” The answer to that depends on a few things including how frequently your students are publishing and the platform through which your students are blogging.

This is one of the big challenges with student blogging. When I used Edublogs in the classroom, I would moderate everything, therefore I would know what is being posted that way. However, I have been wondering lately about the idea of creating a formula in Google Sheets using IMPORTFEED where each new entry to that feed is added to an archive list. Then you could add a simple checkbox to tick off if you have responded to the blog in any way and even condition the whole row to make this process a little more visual.

Another metaphor I often reach for is a DVD. Much of what we do in school feels like the movie on the disk- the paper, the project, the presentation, we focus on the final end product. But my favorite part of DVDs was always all the other stuff, the extras– the director’s commentary, the out takes, the location mini documentary, the story of the making of the movie.

I see blogging as providing that too.
Ask them to write Extras.

I love the notion of the ‘extras’ Alan. I think that I probably need to do more of this.

In regards to comments, I always wonder if we restrict what we consider as a response. I think that being constructive is useful. I just wonder if the ability to comment on Twitter or Micro.blog extends this?

While we can’t control what goes on in the larger blogging community too much, we have much more control over our classroom blogging programs. The comment section is an excellent place to connect, learn, and grow. Who wouldn’t want to tap into that?

Thoughtful as always Kathleen. I found blogging in the classroom really interesting, especially for older students who were well already versed in social media. They actually struggled to properly converse. I still wonder why? I am sure that I could have implemented more elements that you touch upon, but I also think that there was a shallowness. There were habits associated with feedback and engagement that we can sometimes take for granted. When I think about Doug Belshaw’s Elements of Digital Literacies, it feels as if this comes back to communication and confidence, as much as it comes down to cognition and constructive use.

When we rue the old days I wonder if we would be willing to give everything up to go back there? We complain about ‘micro-engagement’, but how many of us are willing to turn our back on the ease and benefits that it can bring? I am reminded of lyrics from The Bleacher’s track, I Miss Those Days:

And everyone is changing
And the storefront’s rearranging
I picked up a quarter and I just saw my face
But it’s all coming back now
Like the feeling isn’t over
Hey, I know I was lost but I miss those days

I am sure that there are aspects that have been lost, but I also wonder if there have been benefits as well? Blogging has changed and always will or as Martin Weller puts it, “the future of blogging is blogging”:

I know blogging isn’t like it used to be. It isn’t 2005 anymore, and those early years were very exciting, full of possibility and novelty. But just because it isn’t what it was, doesn’t mean it isn’t what it is. And that is interesting in its own way, some of the old flush is still there, plus a new set of possibilities. Blogging is both like it used to be, and a completely different thing.

One innovation that I think has potential for supporting comemnts is Micro.blog. It allows users to share a feed from their blog to a central space and converse there. It is build on webmentions which allow comments to be syndicated back to your own site. Although I am not sure that the platform as it currently stands would be the answer, I think the features show a real prospect. I tried using the dashboard in Global2, but found the space was too busy.

I am wondering if you have any thoughts how we could improve comments outside of the classroom too?

We’ve got to stop telling people who are new to social spaces about the “power of audience” because the truth is that most of today’s audiences are muted at best, choosing consumption over participation in nine conversations out of ten.

Bill Ferriter questions the story that we keep on telling about audience and instead suggests three approaches that should be encouraged:

(1). Bring Your OWN Audience

Instead of trying to build a huge audience of strangers, concentrate on building a small audience of peers

(2). Be a Participating Member of Someone Else’s Audience

Start commenting on the work of others.  Start responding to people’s posts in Twitter.  Let people know that you are listening and learning from them.  Show gratitude for the time that they put into thinking and sharing transparently with others.  Provide challenge to their core ideas — and then push those ideas out through your networks.

(3). Draw attention to the ideas of your audience

I want you to think about my buddy Bob for a minute.  He took his own time to read my original bit on audience.  Then, he took even more of his own time to craft a reply that challenged my thinking and articulated concepts that I hadn’t considered. Instead of spending that same time on his own growth, he was making an investment in me and in our intellectual relationship. That matters, y’all — and I need to respect that investment in some way.

Ferriter has been writing a lot recently about reflection, audiences and comments. Personally, I have taken to being more intentional with my comments by sending comments from my own site. This has had its hiccups, but I think that it offers an alternative future and positive possibility.