Why do we love a good beat? Does classical music really make you smarter? Join triple j’s Linda Marigliano and composer Dan Golding as they explore the electrifying fusion of emotion and science in music.

Across 15 episodes, Linda Marigliano and Dan Golding dive into the world of music. This includes topics such as singing, the beat, instrumentation, production, writing, image, YouTube, films and bringing us together. Although it might have been nicer to have been longer, I also liked how concise they each. As a note, the consensus is that music is what you make of it.

Australia is full of diverse Aboriginal and Torres Strait Islander nations. From Bunuba to Wiradjuri, Mabuiag to palawa, every mob has its own language and unique culture. Each episode of Little Yarns will take you on a journey to a different nation to learn a first word on Country.

We’ll travel south across the Tasman Sea to lutruwita (Tasmania) and learn about the mums of palawa country. Look out for crocs in Wadjigany, while we find out about the seasons in Batjamalh language. And keep your eyes peeled for an eight-legged creepy crawly, as we hear how Yawuru language has changed over time. There are hundreds of first languages to listen to and learn from!

Little Yarns is a co-listening podcast series for pre-schoolers. Ideal for families listening together at home or as a listening resource in early learning centres, Little Yarns explores the diverse languages, stories and countries of Indigenous Australia.

Found our new driving pastime with the kids, listening to Little Yarns. It is a great way to learn about history, culture and geography.
In an investigation, the teams at 4Corners and Hack unpack the way in which Tinder responds to claims of assault. Even with the billions in revenue, Match Group has done little to adequately support users. What makes things worse,  is that the platform seems to protect the perpetrators more than victims through the use of the ‘unmatch’ function.

Tinder allows offenders to use the ‘unmatch’ function to block their victims after a rape to delete any trace of their prior communication.

The problem with banning and blocking is that ease of functionality that makes the platform so enticing also makes it a challenge to manage.

They said they couldn’t completely ban someone from a dating platform because it involved banning a user’s IP address, a number assigned to each device or network, and the number would only last for up to 90 days before changing.

Avani Dias, Ange McCormack and Ali Russell have report that Match Group have since responded and are making improvements to the way in which they support victims.

Match Group said it has updated reporting functions within their apps so that users receive a response and are directed to support services.

However, as with Facebook’s backflip on Holocaust denial content, these responses are too often reactive and seem to be about public relations more than anything else.

Editorial executives have one over-riding responsibility: to provide a safe environment in which their staff can do independent journalism, regardless of corporate, political or economic interests.

Part of that is having the professional experience to understand what is involved, which includes absorbing the bullying that comes from powerful people and, where necessary, hitting back.

There has been no sign the ABC’s journalists have been getting that kind of protection, least of all from the board.

Emma Alberici is leaving the ABC, and it’s a story that’s taken on a much deeper meaning

Introducing the first ever DIY Supergroup: the self-isolation comp of your dreams.

What an exciting opportunity.

Every day as the scale of this present coal-black cloud grows across the globe, it’s harder to spot a silver lining, but perhaps in this country it might be this; that in a time of crisis we formed a national decision-making body roughly half of which came from each of our two major parties, and decisions were made that were well outside the orthodox political comfort zone of the people making them, and that some loud voices shut up for a minute, in recognition that the situation was bigger than their own need never to give an inch.

Annabel Crabb reflects on the ability in times of crisis for people and politics to get things done.

Getting private hospitals to work hand in glove with the public system?

All of this would have seemed impossible just weeks ago.

Self-isolation has proven to be an essential measure to curb the rapid increase of coronavirus cases. Here are the rules.

I’m neither shocked by developments in DET (Victoria) or by Milligan’s dumbfounded reaction, but both are unfortunate. 1/

Since the late 1980s, and particularly through the Kennett years, management of schools has devolved and decentralised. This has been consistent with community expectations. There is no central standard issue toilet paper or hand sanitiser. Schools have funds to manage this. 2/
The current model of school management (broadly described as neoliberal) has many issues. Nevertheless ABC journalism has supported this model through programs such as “Revolution School” and the 4 corners “Digi Kids”, which I described as a puff piece and I stand by this. 3/
There is consistent evidence that this model of system management has failed (IBAC Dunham and Ord, PISA NAPLAN results etc). I have seen no journalist engage with these bigger issues. It’s mainly superficial reporting of facts with emotive interpretation. /4

Marten Koomen highlights the issues with supplies in state school and how this relates to the current challenges around funding.

Australia’s education system was once ranked among the world’s best, but its falling reputation has nothing to do with teacher quality and curriculum. The problem is growing inequality, writes Pasi Sahlberg.

Fear of the new contagion has, paradoxically, become a global infection.

The Eleventh is an explosive thriller teasing out everything you never knew about one of the most famous chapters of Australian political history — the downfall of Gough Whitlam. Host Alex Mann seeks out new clues and perspectives about what actually happened via first-hand accounts, many previously untold, bringing to life the scandals and subplots that changed the nation forever. Listen for free from your mobile device on the ABC listen app, Apple Podcasts or Google podcasts.

A podcast providing an in-depth look at Whitlam’s sacking in 1975.

The ABC’s extensive coverage of bushfires ravaging the country threatens to push the taxpayer-funded news organisation into more budget strife with emergency broadcasting events on track to double in 2020.

Jennifer Duke discusses the pressure on the ABC associated with emergency broadcast events.

“The cost of the ABC’s emergency broadcasting coverage come out of base funding – there is no specific government funding for this coverage,” the ABC spokesman said in a statement.

“These costs are growing,” he said.

“We will always prioritise coverage of emergency information and will continue to speak with government to ensure that we are adequately funded to serve the Australian public.”

Celebrating legendary ABC music show Recovery, host Dylan Lewis takes us through the best performances, those awkward interviews and the most random, hilarious moments of the show.

This was a great documentary. I do not think I appreciated how zany and amazing Recovery was. Having grown up with Hey Hey It’s Saturday, Recovery took music and entertainment to a whole new level.

The band plays a striped back version of their song Alligator. Gone are the driving guitars, replaced with subtly of synths and synthetic drums.

Laura Tingle reports on the backlash Scott Morrison has faced when visiting towns. See Jordan Shanks video for a summary. As with George W Bush after in delay in responding to Hurricane Katrina, there is animosity towards to prime ministers ineptitude.

Nobody cares about the Prime Minister’s problems when their house is under threat, or they feel their lives are in danger. They want to know what is being done to help them.

This is highlighted when comparing the current disaster to recent events from around the world.

To give some scale to what has happened here so far, international media outlets have been reporting the 2018 California fires burnt 2 million acres; the 2019 Amazon fires 2.2 million; and the 2019 Siberian fires 6.7 million.

Tingle explains that the biggest problem that Morrison has is that his policy cupboard is bare.

When you look, it turns out that the policy cupboard is pretty bare. The Government’s quarterly figures on what has driven emissions lists figures without any real obvious help from government policy.

The real challenge according to Tingle is when the current crisis is over and we are forced to reimagine life in Australia as we know it.

The real test, however, may not be on what the Government does on cutting emissions, but on how it leads us to confront the sorts of brutal adaptations current events show us we now face: not just the immediate effects of disasters, but the questions they raise like building standards, towns that governments will not able to afford to rebuild, and communities that have run out of water.

This piece follows up from an earlier piece in which Tingle questions the way in which Morrison has responded.

Despite the dramatic rise in the need for emergency broadcasts – from 256 in 2017-18 to 371 in 2018-19 to 673 to date this year – there will be no additional funding to cover the resources which have been poured into the effort, according to the ABC’s director of local and regional, Judith Whelan. And then there’s the small matter of the $14.6m Coalition budget cut to manage this year.

Amanda Meade explains that although the Australian Broadcast Commission has an emergency broadcast policy, there is no explicit funding allocated to this.

After Cyclone Yasi hit Queensland in 2011, the former ABC managing director Mark Scott created an emergency broadcasting policy, in consultation with the Bureau of Meteorology and Australian fire and emergency authorities, Whelan said. The policy commits the ABC to issue all watch and act and emergency warnings and to undertake recovery broadcasting. There is no specific funding for these roles. 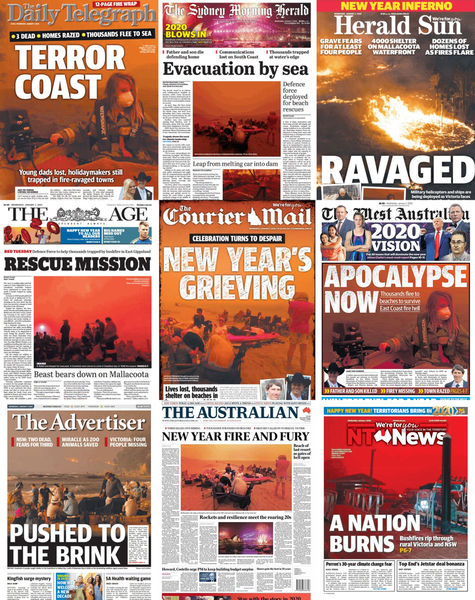 Communities on Australia’s east coast are bracing for another day of serious bushfire threats.

The ABC’s live blog associated with the current fire crisis in Victoria and NSW.

The crew from Fire and Rescue NSW Station 509 Wyoming recorded this video showing the moment their truck was overrun by the bushfire burning South of Nowra. The crew was forced to shelter in their truck as the fire front passed through. #NSWFires #ProtectTheIrreplaceable pic.twitter.com/Hb0yVrefi9

Inside information from one of the world’s biggest sports betting companies reveals the secret techniques to stop punters winning.