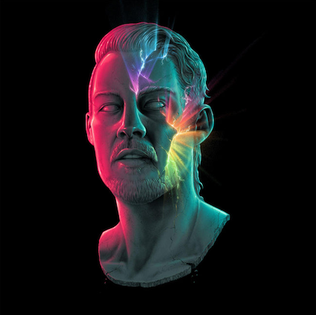 FutureNever is the second studio album by Australian musician Daniel Johns, released on 22 April 2022 through BMG Music Australia. It was announced in December 2021 and initially scheduled for release on 1 April 2022[3] until it was delayed to 22 April to include the song “Emergency Calls Only”.[4] Johns stated that he did not want to release any singles before the album as he intended it to “be enjoyed as an album”.

FutureNever is Daniel Johns’ new album. His latest since Dreams with Luke Steele. It continues with his break from expectations and desire for a past, while also celebrating that which makes Johns’ the artist he is. As Johns shared in a letter written prior to the release of the album, it is a collision of the past, present and future.

FutureNever is a place where your past, present and future collide – in the FutureNever the quantum of your past experiences become your superpower

Manic may be the best single-word answer to describe his new album. FutureNever has some of the whimsical, baroque threads of his last few albums – The Dissociatives with Paul Mac, his own Talk, DREAMS with Empire of the Sun’s Luke Steele – but a lot more darkness. There’s more purge, less varnish, more stylistic confusion and a default pitch that seems to come from the thick of struggle rather than the bliss of creative liberation.

While Andrew Trendell argues that what makes FutureNever ‘unmistakably Johns’ is the sense of vulnerability, curiosity and adventure.

While there’s a lot of Daniel Johns at his best here, this isn’t ‘The Best Of Daniel Johns’. There’s rock bravado throughout, but you won’t get a whiff of ‘Frogstomp’. Styles and eras clash, but ‘Neon Ballroom’ it ain’t. There is, however, a vulnerability, curiosity and adventure that makes ‘FutureNever’ unmistakably Johns. That kid who once asked you to wait for tomorrow is living in it today.

Nathan Jolly explains how the album sounds like a ‘number of separate projects played on shuffle’.

FutureNever feels like a number of separate projects played on shuffle. There are four songs that seem like offcuts from an aborted operetta, a few dance collaborations that belong on Ministry of Sound mixes, and a handful of tracks that split the difference between the slinky electro of his debut solo album, Talk, and his bright and loopy Dissociatives work with Paul Mac. There’s also a lot more guitar shredding than expected, despite this being very much not a guitar record.

Tyler Jenke elaborates on this in a Rolling Stone profile, in which he explains how the album is a combination of three different ideas.

Never one to stop writing or composing (he admits to having thousands of demos around the place), three separate records (which will remain unheard) had managed to make themselves apparent over the years. One, dubbed “The Modern Punk Record”, featured an electronic punk sound; another—”The Opera Record”—was self-explanatory; while “The Modern Electronica Record” featured the sort of futuristic R&B sound he had ventured into with 2015’s Talk.

Johns explains that he is not cohesive and that the album reflects who he is.

“I’m sure I’m going to get slayed in the press, because it doesn’t sound cohesive,” he admits, casually brushing off memories of past criticisms. “But I’m not cohesive.

“Some people are going to be perplexed because it’s not an experience of a record that I’ve ever done before. It’s more a collection of stuff that I’ve been doing while everyone thought I was dormant.”

At the end of the day, writing for Johns is about figuring things out.

Are You Haunted? is something of a haunting experience in itself. On the surface, it is an infectious album with beautiful production and rich hooks. However, the more you listen, the more the deeper messages within come out. There are plenty of anchovies to be had.

The references to memories and ghosts reminded me of The Avalances’ We Will Always Love You. I am left wondering if one of the general consequences of the pandemic will be a dive into memories and the haunting past seemingly taken from us?

I also enjoyed the love performance of the album shared on Youtube.

“What I’m interested in when it comes to writing music are ideas of memory – how you split as a person and live parallel lives,” he says. “Your past, present and future selves are like ghosts of ourselves – somehow you are this already long dead person, walking through a world that you are not really materially even present in at the time.”
…
“To me, the record is this one solitary person sitting down at a piano and all of the songs are played out in this person’s head,” he says. “But I thought of all the chorus for all these songs being sung quite literally by a chorus, like in those old ancient Greek plays, [where] there is quite literally a chorus of people who are the moral compass. I tried to make most of the chorus have this ‘big group’ sound to them.”

Some tracks compel introspection, others make you prance around the room, while still others encourage intimate activities. It’s goth without the glower, and it can be spooky but never spectral. That’s a hard line to walk, especially when your art rejoices in creating emotional connections with its listeners.

But from the beginning of the album to the sweeping instrumental epics of “In a Minute, Sublime” in the album’s final moments, the message of Are You Haunted? is clear: In the face of your ghosts, dance them away.

Dawn FM is the fifth studio album by Canadian singer-songwriter the Weeknd, released on January 7, 2022, through XO and Republic Records. It features narration by Jim Carrey, guest vocals from Tyler, the Creator and Lil Wayne, and spoken word appearances from Quincy Jones and Josh Safdie. As the album’s executive producers, the Weeknd, Max Martin and Oneohtrix Point Never recruited a variety of other producers such as Oscar Holter, Calvin Harris and Swedish House Mafia.

The Weeknd described the album’s concept as a state of purgatory—a journey towards the “light at the end of a tunnel”, serving as a follow-up to his fourth studio album After Hours (2020). Musically, Dawn FM is an upbeat record containing dance-pop and synth-pop songs that are heavily inspired by the 1980s new wave, funk and electronic dance music styles. The album received widespread acclaim from music critics, who complimented its production and melodies.

It has been interesting reading some of the reviews of Dawn FM.

The radio-station conceit does enhance the album’s nostalgic, one-step-removed feel, much the way an early 2010s-mixtape concept did for last year’s Tyler, the Creator album; Tyler guests here (somewhat forgettably) on the very yacht-rock-ish track, “Here We Go … Again.” Perhaps most valuably, the format gives Tesfaye and his producers—primarily his longtime collaborator Max Martin and more recent helpmate Daniel Lopatin (a.k.a. Oneohtrix Point Never)—greater license to indulge their throwback sonic instincts, as well as to transition seamlessly, DJ-style, between tracks. The sudden, always belated realization that the previous song has already ended and a new one begun brings on a pleasantly startled frisson, almost as one might hope about the transition between one plane of reality and another.

I wonder if The Weeknd has been panned for experimenting with a different way of presenting his music. For me, I think Jim Carrey’s commentary help make this album flow together. In some ways it reminded me of Madonna’s Confessions on a Dance Floor mixed with Oneohtrix Point Never’s  Magic Oneohtrix Point Never.

Fix Yourself, Not the World is the fifth studio album by British rock band the Wombats, released on 14 January 2022. It was preceded by the singles “Method to the Madness”, “If You Ever Leave, I’m Coming with You”, “Ready for the High”, and “Everything I Love Is Going to Die”. The album will be supported by an America, Europe and Australia tour throughout 2022.

I was always intrigued by what music the pandemic would throw up. Fix Yourself, Not the World speaks to the moment in more ways than one.

Pieced together over distance, as so many have this last couple of years, the band have swapped plans and files between Oslo, London and Los Angeles to create these songs, and then fired them off to an impressive list of producers to mix them. So this album finds them working with the likes of Jacknife Lee, Gabe Simon and Mark Crossey amongst others, and the result somehow hangs together surprisingly well. Distance, it seems, is no barrier, when there’s something special happening and there’s a drive and determination to make it work.

Described as a “self-help manual for the domesticated malcontent,” their fifth album ‘Fix Yourself, Not The World’ has a recurring theme of fixing throughout. The remarkably cohesive, inventive and forward-thinking guitar pop record finds frontman Matthew Murphy turning a psychological corner and highlights the bands bond and experience to power through such setbacks.