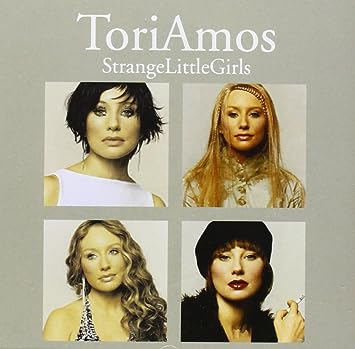 Strange Little Girls is a concept album released by singer-songwriter Tori Amos in 2001. The album’s 12 tracks are covers of songs written and originally performed by men, reinterpreted by Amos from a female’s point of view. Amos created female personae for each track (one song featured twins) and was photographed as each, with makeup done by Kevyn Aucoin. In the United States the album was issued with four alternative covers depicting Amos as the characters singing “Happiness Is a Warm Gun”, “Strange Little Girl”, “Time,” and “Raining Blood”. A fifth cover of the “I Don’t Like Mondays” character was also issued in the UK and other territories. Text accompanying the photos and songs was written by novelist Neil Gaiman. The complete short stories in which this text appears can be found in Gaiman’s 2006 collection Fragile Things.

These reimaginings by Tori Amos are somewhat uncanny. Unlike other covers, such as Mark Ronson’s Just, where there is a respect to the original structure and sound, Amos reimagines just about every facet of the songs in question. It is easy to listen to many of these tracks and not necessarily recognise the original track.