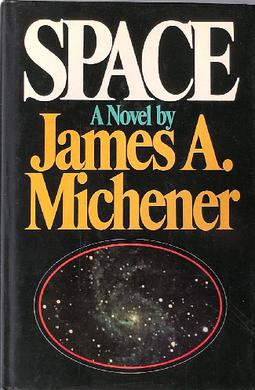 The story begins in 1944 and covers more than 30 years in the lives of four men and their families: Dieter Kolff, a German rocket engineer who worked for the Nazis; Norman Grant, a World War II hero turned U.S. Senator from a fictional mid-west state; Stanley Mott, an aeronautical engineer charged with a top-secret U.S. government mission to rescue Kolff from Peenemünde; and John Pope, a small-town boy turned Naval Aviator who becomes a test pilot and then an astronaut. Randy Claggett, a rambunctious Marine Corps aviator and astronaut, is considered by Michener to be the most important supporting character (the first two parts of the book are entitled “Four Men” and “Four Women”). The lives of the fictional characters interweave with those of historical figures, such as Wernher von Braun and Lyndon Johnson. A group of trainee astronauts are introduced to fly fictional but plausible Project Gemini and Project Apollo missions; the intensive training and jockeying for position among the astronauts forms much of the background of the middle of the novel, reminiscent of a fictional version of Tom Wolfe’s The Right Stuff and the movie as well.

I remember growing up with bookshelves filled with James A. Michener’s novels at my grandparents, but never really taken to picking any up. Although there are key characters, they are books tied together around a concept.

For me, Space was more than just about the exploration of the universe. It was also an exploration of the concept of space itself. Whether it be the creation of a space for ideas to thrive, being in a political space to make a difference, being in the right place at the right time (see Cory Doctorow), working in a pragmatic space where lies and truth do not matter, making clear a place of race within space, and manipulating space to own and control it.

Always remember, John, that you and I live on a minor planet attached to a minor star, at the far edge of a minor galaxy. We live here briefly, and when we’re gone, we’re forgotten. And one day the galaxies will be gone, too. The only morality that makes sense is to do something useful with the brief time we’re allotted. (Page 77)

It takes sixty-five thousand errors before you’re qualified to make a rocket. Russia has made maybe thirty thousand of them by now. America hasn’t made any. Therefore, men like you and me and the general, we’d be a hundred times more valuable to the Americans than to the Russians.’ (Page 93)

It was now that she exhibited her devotion to the principle she had expounded at college: The test of a woman is how she organizes space. In the Mott rooms at the motel she established a place for everything and rigorously discarded any object that was not essential; as a consequence, the Motts lived in constructive order, whereas most of the other young couples, many from places like Vassar and Harvard, lived in chaos. (Page 147)

She was both amused and impressed by General Funkhauser, for he was an obvious fraud but one determined to please his new American masters. (Page 158)

The clerk at the Bonn embassy who handled such routine matters was a black man, assigned there to prove to the Germans that America did not want to go the way of Hitler’s racism. He was, of course, the only black in the embassy and vastly overeducated for his job, but he was effective; (Page 172)

She looked at him but did not smile appreciatively, as he thought she might. She frowned, for she saw in this young man with the close-cropped hair, the dark blue suit, the highly polished black shoes, America’s version of the perpetual policeman: the SS who knocked on doors at night; the French Sǔreté men she had known while waiting for her boat at Le Havre; the Russians whom she had escaped. They were the same in all nations, essential but to be avoided (Page 179)

For an additional medal, men would lie, exaggerate, falsify, support friends in hopes that friends would support them on some later claim; above all, they would take the most outrageous risks in order to qualify for one more ribbon. (Page 205)

They don’t shoot you in Huntsville. They do worse. They cut off your funds.’ (Page 240)

‘Don’t you see?’ he asked Mott as he engineered him toward the exit. ‘I depend on you. It’s the explorations you men at NACA conduct, the pronouncements you make, that agitate my clients and send them running to me. The more you succeed, the more confused the world becomes, and the more I’ll be needed. Now you go back to your test tubes and rockets and do my work for me.’ (Page 287)

When he produced his snapshot of the mean quarters, Mrs. Grant refused to look at it; instead she smiled slightly, her lips primly together, as if she held a secret that these two men could never comprehend. And as he proceeded with his deflation, introducing more and more evidence, her smile persisted. No matter what he said, she had anticipated it and erected her defenses against it; in the end he accomplished nothing. (Page 287)

Car became a cathedral-in-motion in which two worshippers convened to settle family questions of the highest moment. (Page 298)

It lay along an edge of the constellation Coma Berenices and was about twenty million light-years distant, which meant that what Mott was seeing in 1961 was what the galaxy had looked like 2 × 10 7 years ago, and it awed him to realize that in the multiplex of years since that moment, the galaxy could have modified totally, or moved … He was seeing an echo of some great thing that had once existed, and wherever he looked in the outer universe he was seeing the same type of thing: evidence that greatness had once been, but no proof whatever that it still was. (Page 392)

He had started with little green men, moved on to the founding of a bogus university and now to a religious temple, but what not even his wife Marcia had detected, he planned soon to surrender his basilica in Los Angeles and acquire several thousand acres in the suburbs to house a temple and a real university based on the Bible. (Page 770)

‘An age is called Dark not because the light fails to shine, but because people refuse to see it.’ (Page 772)

XI. The Rings of Saturn

The old professor would not permit this question. ‘You must break the habit, in your thought if not in your speech, of saying “up to the Moon” or “back down to Earth” or “up to the stars.” There is no up or down , no above or below. There is only out to and back from in reference to the center of the Earth. If you use the plane of the Galaxy as reference, we’re clearly off the central axis, but whether we’re up or down, who knows? I don’t even like the phrase out to the edge of the universe. We may be the edge, so that everything we see exists between us and the opposite edge. More likely, the edge is everywhere, for I think that space is without direction or definition. You can’t express it in words, I suppose, but you must induce that concept among your students, for otherwise they can never become astronomers.’ ‘Look!’ one of the girl st (Page 818)

Instead of trying to defend himself, Strabismus leaned forward eagerly to explain. ‘A lot of people in this country believe we never got to the Moon. They believe it was all a government hoax, and I was speaking to reassure them.’ ‘So you gather all the mind-weary dissidents—the anti-everythings—and you build a great constituency. And one day you’ll find yourself the new Jim Jones … but in a more devastating arena.’ (Page 826)

Man is the measure of all things, he admitted to himself, but it matters greatly what he measures. (Page 842)

Are we the ones who are at fault? he asked himself. Have we failed to bring the world along with us? Why did Mrs. Grant retreat into her cocoon, denying everything that her husband stood for? Why does Strabismus receive such thundering approval when he turns the clock back? (Page 842)

When you rebuild starting from scratch, you adopt only the most modern concepts. This means those countries whose factories weren’t dynamited are burdened with old-fashioned ways. They must fall behind.’ ‘Would you recommend that countries like England and the United States blow up their factories every thirty years?’ ‘The world would be a much better place if we did … periodically.’ ‘Why don’t we?’ (Page 848)

What do you do about Reverend Strabismus and his ilk?’ ‘I think you bear with them. Admit that if society did not yearn for them, they wouldn’t achieve the power they do. And hope that like Savonarola, they pass quickly without doing too much damage.’ (Page 849)