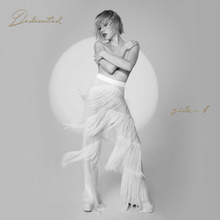 Perhaps Dedicated Side B benefits from the absence of all that pressure. These 12 tracks are once again leftovers from Jepsen’s album sessions, a pool of material supposedly more than 200 songs deep. Yet track for track they’re at least as good as the original Dedicated offerings, if not better, and they hang together much more naturally. When you’ve spent almost half a decade choosing between dozens upon dozens of songs, your judgment can become clouded. We must now consider the possibility that Jepsen simply chose the wrong songs last year because this collection of outtakes is easily her most satisfying release since E•MO•TION.

I found Carly Rae Jepsen’s B-Side album an interesting listen. In an interview with Nate Sloan and Charlie Harding, she discusses the process for choosing which tracks make the album(s) and which do not. This is also done through the creation of charts plot aspects of the songs so that she has the right mix. For example, This Love Isn’t Crazy nearly missed the cut for the B-Side, but was a last minute addition as she wanted to start off with a bang to emphasis that B-Side was not necessarily an album to clean to.