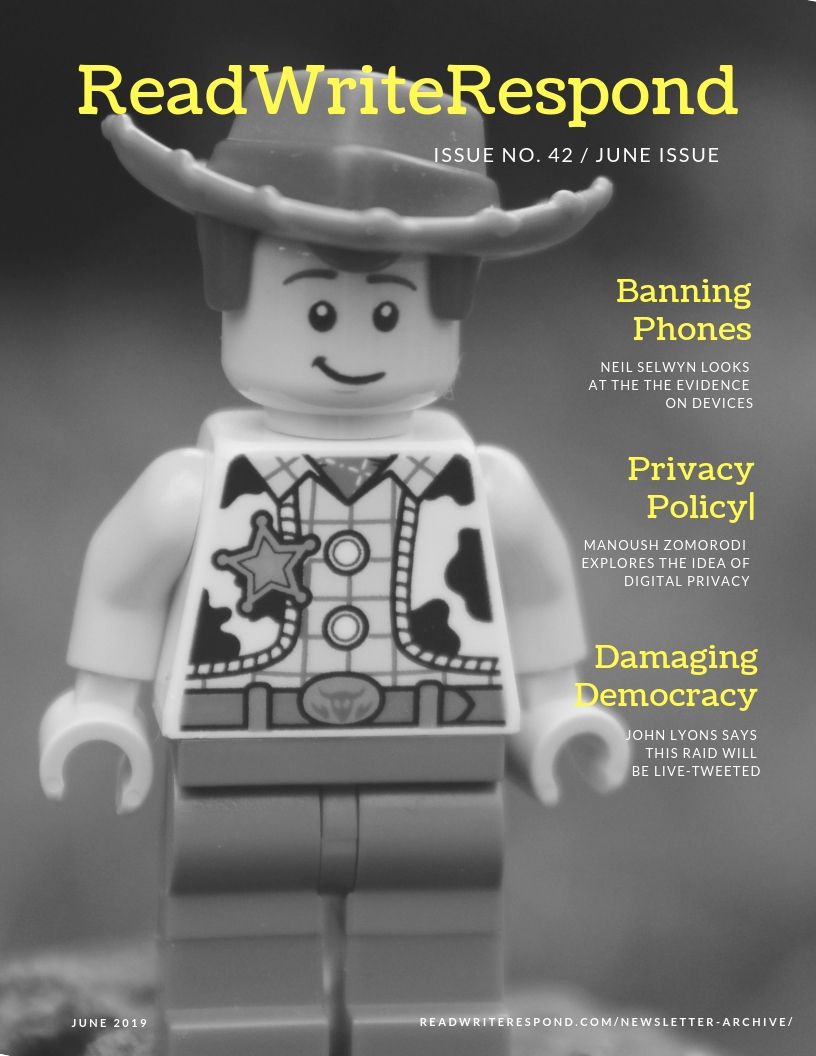 Welcome to another month of Read Write Respond, a newsletter of ideas and information associated with all things in and out of education, mined and curated for me and shared with you.

June is always an interesting time in the the school year. With end of semester, biannual reports and the cold and flu season. This year did not disappoint.

Due to a change of circumstances, my wife has stepped up in regards to her responsibilities at work. Along with being more involved within the leadership group, she has been organising replacements teachers each day. Along with study, this has left her with very little time for anything else. Subsequently, this month, even more than usual, I have been taking the ‘second shift‘ balancing meals, pickup, cleaning and general runaround.

On the work front, I was posed with a question: do you want to do on-boarding of new schools or consultation where I would work collaboratively with schools to solve their problems. Although I was torn with where I see myself long term, I said that onboarding was more of an imperative right now so that is where I needed to be. So I have been progressively moving to the PreFlight team, although in many respects I already was in that team. This is all while guiding a few schools through the reporting season.

Personally, I have continued to take Friday’s off on leave to stay home with Ms 3, which is a priceless opportunity in my opinion. (She is only 3 for one year.) I have been listening to quite a few records, including Art of Fighting’s Luna Low, Peter Gabriel’s Scratch My Back, Radiohead’s MINIDISCS and Kirin J Callinan’s Return to Centre. However, the album I keep coming back to has been Mark Ronson’s Late Night Feeling. I finally saw Dr Strange, which helped make a bit more sense of Endgame. I finished reading Mike Monteiro’s Ruined by Design. In regards to workflows, I finally got around to adding my social media feeds to Inoreader. I also wrote a couple of longer pieces. One a response to Austin Kleon arguing that blogging is about letting ideas into your world, not vice versa:

Twist Your Head Around, It’s All Around You – a Reflection on Letting Blogs In

The second post about the importance of trusting teachers:

Banning mobile phones in schools: beneficial or risky? Here’s what the evidence says

Neil Selwyn suggests banning phones overlooks the immediate measures to deal with cybersafety, ignores the digital distraction associated with all devices and misses the opportunity for a conversation.

Bianca Hewes documents her use of Socratic Seminars to support students in engaging with the critical frame.

How to study (for English)

Deborah Netolicky shares some strategies and suggestions to support the study process.

Chris Wejr reflects on his experiences of using learning sprints as a means of making small and meaningful impact.

How (and why) to roll your own frameworks in consulting engagements

Tom Critchlow on co-creating a framework to inform decision making.

Manoush Zomorodi leads an exploration of what we mean by privacy by taking a dive into privacy policies.

Decades of history could be ‘erased from Australia’s memory’ as tape machines disappear, archivists warn

James Elton discusses the demise of tape machines and the memories kept on them.

Martin Hawksey takes a look at privacy and security associated with our digital futures.

Why Most Marketing Emails Still Use HTML Tables

Ernie Smith discusses the problems with email and the need to move forward.

AirPods Are a Tragedy

Describing the Apple AirPod headphones as if from the future, Caroline Haskins breaks down the impact of the device on the world at large.

John Lyons reports Australian Federal Police’s raid on ABC and what this means for democracy.

Research: Women Score Higher Than Men in Most Leadership Skills

Jack Zenger and Joseph Folkman discuss research into women in leadership. What was interesting was the influence of self belief.

After a near-death experience, Andrew Denton has a new intensity

Konrad Marshall provides a profile for Andrew Denton and his talk show Interview.

Ronald Purser argues that paying closer attention on the present is not revolutionary, but rather magical thinking on steroids

So that is June for me, how about you? As always, happy to hear. Also interested if anyone has any thoughts on the changes I made. Rather than including a range lengthy elaborations, I have provided a short summary and linked to my bookmarks.