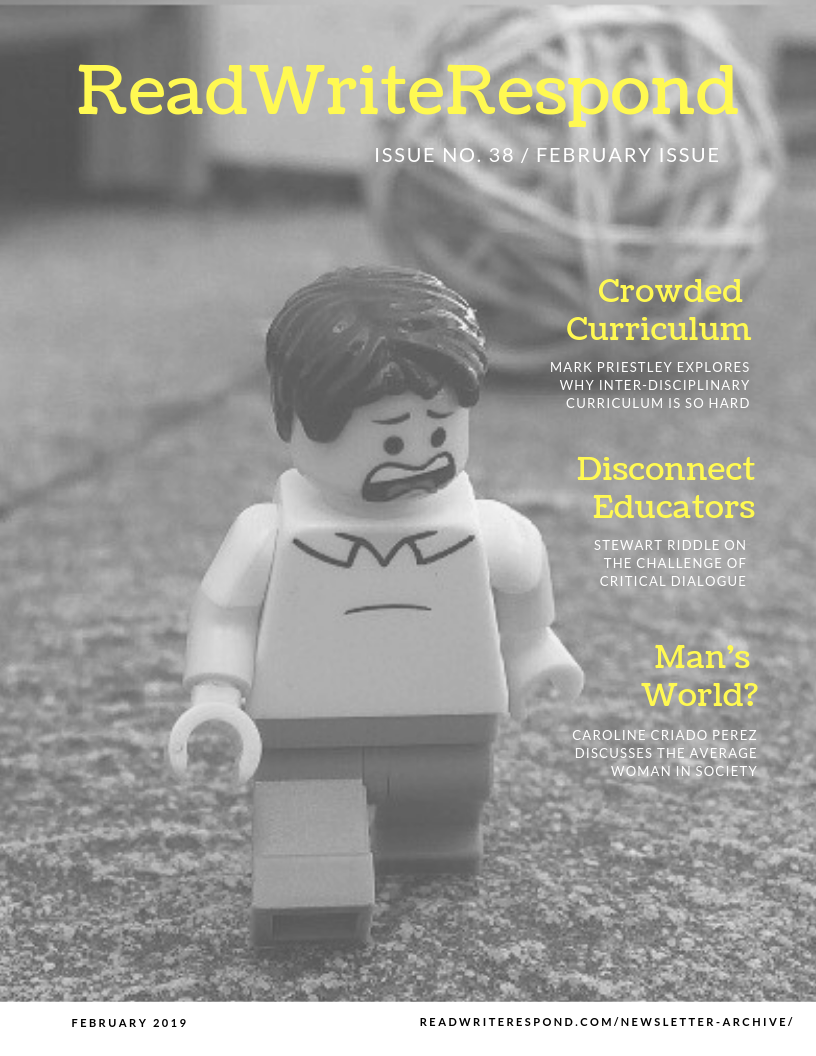 My Month of February

Work has continued to roll on this month, with one eye on schools already transitioned and another focused on supporting those coming on. On a side note, I have started attending SIF meetings. I am constantly reminded of the complex machine that education is.

On the family front, I took my daughters to IKEA for an outing. It was the Ms3’s first visit. I swear she thought the whole thing was one big play space, but then it made me wonder, maybe it is. A space where we play with different possibilities. We also celebrated my kid brother’s 18th. Oh I feel old now.

Personally, I read Douglas Rushkoff’s book Team Human and have been listening to Pure Imagination, No Country by Dave Harrington, as well as Triage by Methyl Ethal. I also wrote a reflection summarising ten things about me.

In addition to all this, here then are some of the thoughts that have also left me thinking …

Inter-disciplinary curriculum: why is it so difficult to develop? – Mark Priestley discusses some of the challenges associated with inter-disciplinary curriculum in Scotland, including the differences between primary and secondary education. It is interesting to consider Priestley’s research and observations alongside Richard Wells’ 2020 project. Greg Miller also wrote a useful provocation on what he sees are the new norms of education.

The Meaning of ‘Flow’ in Education – Jenny Mackness reflects on flow from the perspective of Iain McGilchrist. Unlike Mihaly Csikszentmihalyi (pronounced ‘me-high-cheek-sent-me-high’), McGilchrist argues that everything is in flow all of the time, the problem is that sometimes we lose track of this. To regain a sense of this ‘both/and’ thinking which celebrates change, we will need to rethink our focus on data and measurement.

“We Measure What we Value and We Value What we Measure” – Maybe Not – Bernard Bull argues that sometimes what we value cannot actually be measured. This reminds me JL Dutant’s question as to whether the solution to too much testing is more testing. For danah boyd we need to break with the addiction to stats feed by big data.

The Trouble With Autism in Novels – Marie Myung-Ok Lee reflects on the place of autism within literature and discusses some of the issues with this. Interestingly, Myung-Ok Lee does not mention Mark Haddon’s The Curious Incident of the Dog in the Night-Time. I remember reading Haddon’s thoughts on representing autism in a review. Another interesting post lately about autism was An Office Designed for Workers with Autism by Susan Dominus.

Four things teachers can do to help young people critically navigate social media – Luci Pangrazio provides four ways that schools and teachers can support young people in the social media issues. These include finding out what students are doing with social media and what challenges they face, developing understandings of the structure of social media platforms, providing opportunities to critically reflect on the construction and interpretation of digital identities, and analysing how news is presented on social media. I still think that the most effective way to engage with social media is through the use of a managed environment. In regards to reflecting on what students are doing, I have found Dave White’s Visitor/Resident tool the most useful.

Teachers and Social Media with Stewart Riddle – Stewart Riddle talks about the collapse in dialogue online, especially in regards to solving social problems. He discusses the rise in educelebs, where the focus becomes on the individual, rather than the change at hand. See for example Darcy Moore’s discussion of the ‘cult of John Hattie‘. Riddle questions our understanding of how problematic being on Twitter can be. He discusses @RealPeerReview and the role that serves in fuelling mass criticism. Riddle is mindful of pointing out that this is not that experience of everyone and that there is still an eduTwitter focused on sharing practice and resources. Something captured by Ian Guest. This is another post to the list associated with toxic Twitter.

The Secret History of Women in Coding – In an article adapted from “Coders: The Making of a New Tribe and the Remaking of the World,” Clive Thompson breaks down the gender divide when it comes to coding. He profiles the early journeys of Mary Allen Wilkes and Elsie Shutt. This is contrasted with the current context of a male dominated space. He explores a number of reports, practices and policies that led to the transition from these early years to today, as well as attempts to push back on this.

CERN 2019 WorldWideWeb Rebuild – A team of programmers gathered together at CERN to celebrate 30 years of the web. This involved getting the first browser working again. You can see a breakdown of this here. This site provides a useful provocation for appreciating where we have come.

Programming as translation – Alvaro Videla uses the frame of translation to understand the biases and choices inherent in capturing the world in code. Discussing the work of Umberto Eco, Videla suggests that we need to focus on ‘almost the same thing’. This act of negotiation recognises the bias and interpretation inherent in the act of coding, as well as impact this then has on the thing being described.

Momo Is Not Trying to Kill Children – Taylor Lorenz explains that the ‘MOMO challenge’ is another hoax built around fear and hysteria. The real issue is that the internet is changing the world of young people with much of this out of our control. In part, this is something Julian Stodd touches upon in his discussion of the algorithmic wars. Some other read on digital control is Alexandria Samuel’s discussion of parenting styles, Cory Doctorow’s reports on griefers and Alex Hern’s news about YouTube comments and paedophilia.

Can AltSchool—The Edtech Startup With $174M From Billionaires Like Zuckerberg And Thiel—Save Itself From Failure? – This is a fascinating look at the hype and promise surrounding AltSchool. I know schools change over time, but it must be an odd space to be in somewhere that is so open about adapting and evolving much of what it does. The story of investment in Venilla’s vague outline has me thinking about Audrey Watters’ post about interconnected nature of technology investment. This is a useful read alongside Ben Williamson’s Big Data in Education.

The deadly truth about a world built for men – from stab vests to car crashes – In an edited extract from Invisible Women: Exposing Data Bias in a World Designed for Men, Caroline Criado Perez investigates the end of the average man. From heating in offices, cancer research, weight of building equipment, gender ‘neutral’ toilets, size of mobile phones, voice recognition systems, crash test dummies and the fitting of protective vests, Criado Perez highlights many of the gender imbalances created by thinking first about males. I am reminded of Geert Lovink comment on Team Human about the way technology is often designed for women, not by women. This would be an interesting investigation in school for design and technology to investigate who schools benefit more and possible suggestions or solutions.

All the Bad Things About Uber and Lyft In One Simple List – Angie Schmitt compiles a number of negative effects associated with Uber and Lyft. They include an increase in driving, predominantly operating in transit-friendly areas, often replacing biking and walking, hurting transit and hoarding data. It is interesting to consider this disruptive innovation alongside a wider discussion of the future of public transport.

Are we on the road to civilisation collapse? – In an article a part of a new BBC Future series about the long view of humanity, Luke Kemp unpacks the historical reasons that have contributed to the fall of past empires. These reasons include climate change, inequality, increasing complexity and demand on the environment. Although Kemp suggests there are reasons to be optimistic, he also warns that the connected nature of today’s civilization has made for a rungless ladder where any fall has the potential to be fatal.

Oh God, It’s Raining Newsletters – Craig Mod takes a dive into the world of the newsletter. This includes an investigation of the platforms, as well as some ‘good people’ with newsletters. He makes an interesting observation that many writers are now doing their best work in newsletters. This makes me wonder how ‘newsletters’ as a form fit within the discussion of the development of blogs over time. Another post that is worth reading on the topic is Simon Owens’ ‘Email newsletters are the new zines’.

Balinese Hinduism – In the first post of a new series looking at different beliefs, Chris Betcher reflects on his time spent in Bali their practice of Hinduism. This is more than Betcher’s attempt to write a Wikipedia page, instead he is open about the different customs and his particular experiences. In some ways this reminds me of John Safran’s documentary series, John Safran vs. God. I look forward to following this series throughout the year.

So that is January for me, how about you? As always, happy to hear.

Also, feel free to forward this on to others if you found anything of interest or maybe you want to subscribe? Otherwise, archives can be found here.