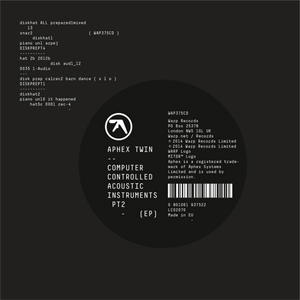 I totally missed the release of Computer Controlled Acoustic Instruments pt2. I recently came upon it while reading Scott Wilson on Richard D James’ use of the Disklavier. It is billed as a follow-up to Drukqs:

Part 1 is Drukqs, as that was the first thing I released that utilised computer controlled instruments, namely a modified Yamaha Disklavier, 2nd gen and a couple of midi controlled solenoid based drum mechanisms I made just after I got the Disklavier.

However, I feel that the repetitive form has is also reminiscent of Selected Ambient Works Volume II.